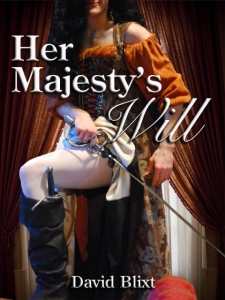 Her Majesty’s Will, by David Blixt, was an unexpected breath of fresh ink on a stage flooded with a sea of books that is today’s publishing world. Blixt’s novel stands out as a unique and original prose that will have you laughing so hard you’ll spit out your drink.

About Her Majesty’s Will~(Review continued after synopsis)

England, 1586. Swept up in the skirts of a mysterious stranger, Will Shakespeare becomes entangled in a deadly and hilarious misadventure as he accidentally uncovers the Babington Plot, an attempt to murder Queen Elizabeth herself. Aided by the mercurial wit of Kit Marlowe, Will enters London for the first time, chased by rebels, spies, his own government, his past, and a bear.

Through it all he demonstrates his loyalty and genius, proving himself to be – HER MAJESTY’S WILL.

Though I knew the book was historical in nature, a period novel with a main character like William Shakespeare, I was pleasantly surprised by Blixt’s writing style. Being a playwright himself, and commanding the stage and festivals that surround the works and times of Shakespeare, I found this influence in Blixt’s books as well. From starting chapters proposed as  “Acts” to writing to make the audience (this time the reader) laugh, with a good mix of action as well, this book was fantastic and extremely fun! It really came to life off the page and I found a new love for Shakespeare and Kit Marlowe as unlikely (and sometimes bumbling) detectives. Pure genius!

Blixt’s vocabulary and precision in his workmanship is literary gold. The way his words seemed to flow and move around on the page, it’s as if my eyes were deceiving me.  They seemed to dance and joust on the iPad as if I was watching a real live production. The words were so seeped in detail and the choices so extravagant that they seemed to roll around on my tongue as I savored and swallowed the plot.

I love to read novels set in the time period of the Elizabethan Age. And certainly there is alot that deal with the extravagance of court life, romance, and political intrigue. While this one deals with intrigue too, of course it was everywhere during this time period (the start of the intelligence agencies as we know them even now), it was presented through characters (commoners) that people sometimes forget were from the same jeweled era as the Tudors.  An era of society transition under Queen Elizabeth, no one knew who they could trust. Blixt takes this familiar scenario and shows it to the reader from a separate angle, from the life of simple playwrights, and takes on imaginative versions of the lives of Shakespeare and Marlowe, filling all the inconsistencies and holes in their history with “what ifs” and exciting adventures. Full of puns and slapstick harmony between the two friends, Blixt spins a truly hilarious yarn that you won’t want to put down.

Blixt has several other books out that I can’t wait to read now. His Majesty’s Will was a riot, as well as a good mystery, and should be a hit with period novel readers who have a funny bone or are looking for some light-hearted entertainment.

Stay tuned tomorrow (Dec. 14) for an EXCLUSIVE guest post brought to us by David Blixt! It’s one you won’t want to miss reading so schedule it on your calendar now!

One (1) e-book copy of His Majesty’s Will to a lucky reader!

–Open everywhere (it’s an e-book in .pdf or .mobi file)

–Extra entries:  +1 additional entry each for following David Blixt on Twitter, his Facebook Fan Page, or Clicking Like on Amazon book page.  Please inform me which you did in comments or by email.

About the Author: David Blixt~ 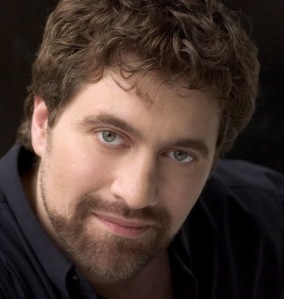 Author and playwright David Blixt’s work is consistently described as “intricate,” “taut,” and “breathtaking.” A writer of Historical Fiction, his novels span the early Roman Empire (the COLOSSUS series, his play EVE OF IDES) to early Renaissance Italy (the STAR-CROSS’D series, including THE MASTER OF VERONA, VOICE OF THE FALCONER, and FORTUNE’S FOOL) up through the Elizabethan era (his delightful espionage comedy HER MAJESTY’S WILL, starring Will Shakespeare and Kit Marlowe as inept spies). His novels combine a love of the theatre with a deep respect for the quirks and passions of history. As the Historical Novel Society said, “Be prepared to burn the midnight oil. It’s well worth it.”

Living in Chicago with his wife and two children, David describes himself as “actor, author, father, husband. In reverse order.”

For more about David and his novels, visit www.davidblixt.com.

Link to Tour Schedule for other reviews, interviews and guest posts on David, and all his other books, by clicking on tour button below.  Follow the Tour on Twitter with Hashtag: #DavidBlixtVirtualTour.

I was given this complimentary copy in return for a fair and honest review. All opinions are my own.