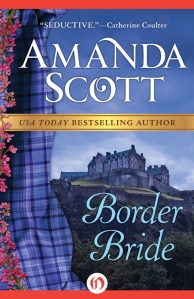 Amanda Scott is a USA Today Bestselling Author  and has over 50 romance books under her belt.  She’s done a lot for the Scottish romance subgenre I hear, but since I don’t read predominately romance or regency, I’ve never read Amanda Scott.

When I was asked to be a part of her blog tour for several of her books, each from a separate series, I agreed to try them out. I am very open-minded about reading and genres. Plus I love historical fiction and historical fiction romances are many times very good. Scott seems like a good writer and capable of putting historical detail together with a plot to tell a story.

In reading Border Bride, which is part one of her Border Trilogy first produced in paperback in the 1990s, it’s evident she is of Scottish heritage.  As a reader you can tell she is very knowledgable of the culture and heritage.

I enjoyed Scott’s preliminary and underlying character development of female protagonist Mary Kate, who at first seemed independent, self-respecting and feisty.  However, she soon became controlled, dominated, self-conscious and apologetic. I understand history and I understand the role women played in most cultures, and in various social classes within cultures, but never have any of the other amazing historical writers I’ve read taken it to this level.

I am sure that Scott meant to just show how her life may have been through her controlling father arranging her an even more controlling marriage, but reading this topic is always hard for someone like me who is a domestic violence survivor. I hated her father and her husband both, but I tend to have that feeling toward any males who act in this manner no matter what time period they come from.

I’ve read so many other books written in the past that show that a man was head of the household, but also was not abusive and I tend to believe that there were good men in the past too. I didn’t like seeing a strong woman worn down. It would have been nice to also see Mary Kate slowing changing him throughout the story until they meshed as a respectable couple. Women want an escape from reality with romance, no matter what “proper historical detail” dictates. Also, there were men even in that time period who listened, respected and adored their wives. There were also many strong woman who are featured in stories as overcoming this type of life with a man. I suppose I was just mostly confused why she didn’t wrap this up into a happy ending with Mary Kate.

I had a hard time from the beginning also reading her conversations written in old Scottish dialect. It made the book very hard to follow and I ended up skipping many paragraphs. It isn’t that I am not smart, I just didn’t care to struggle through the book. I wanted an enjoyable read, not a lesson in Scottish dialect, even if she was trying to be true to the time period and culture.

I am sure this is not the review that Amanda Scott wanted. In fact, I think this is my first negative review on my blog ever. I just hated even having to put one up.

But I won’t support such abusive behavior in characters. Maybe someone who likes controlling relationships, or dominating men, which I am sure some women do, will like to pick up a copy of this book. I just wouldn’t recommend it to someone who has been beaten down emotionally already. It won’t be entertaining for them. To each his own and it’s a readers decision, but really when he threatens to “skelp” her at the end for being naughty when she tries to secretly assist him, and she feels she deserves a beating, then he graciously fondles her instead like he is doing her a favor, and she swoons…..well, I found it very unnerving.

I was surprised at the re-issuing of this book since it was already published in 1990 with many negative reviews. I think Scott should consider a letter to readers as to her intentions if she plans to keep publishing these books. From a marketing perspective, I am baffled why one of my favorite new publishers, Open Road Media, would pick up this series to digitize it for publication. Maybe they are trying to latch on to the Fifty Shades of Grey (also didn’t read) or the bondage erotica rage, but really in this novel it just seemed very sad. Sometimes a head-up and a sell to a target audience is better than randomly saturating the market.

So there is my first review on my blog of a book that just left me confused. But by all means, try it for yourself if you’d like. I’ll still be trying more Amanda Scott to see how her other work compares.

On a postive note, I LOVE the covers Open Road Media provided for her new electronic titles!

Set in treacherous sixteenth-century Scotland, the first volume of Amanda Scott’s Border Trilogy tells the unforgettable story of a woman sworn to defy the knight she is forced to wed—only to discover a love she’ll do anything to claim

As Mary, Queen of Scots, languishes in the Tower of London as a prisoner of her cousin, Queen Elizabeth, war tears Scotland apart. To save her beloved homeland, a proud Highland beauty named Mary Kate MacPherson must wage her own battle when she’s forced into wedlock with a knight, Sir Adam Douglas, from the barbaric borderland of Tornary.

Even as she succumbs to her seductive husband’s sensual demands, Mary Kate vows never to give him her heart. She will belong to no man. But Adam burns with something deeper than desire. Sworn to carry out a long-awaited revenge, he won’t rest until he has vanquished his enemies. Accused of treason, the last thing he expects is to lose his heart to the woman he’s determined to tame but never to love: his own wife.

The first part of the Border Trilogy is Border Bride, see here for the entire series: http://www.openroadmedia.com/border-bride 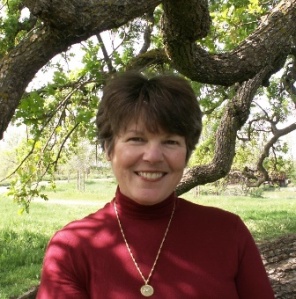 A fourth-generation Californian of Scottish descent, Amanda Scott is the author of more than fifty romantic novels, many of which appeared on the USA Today bestseller list. Her Scottish heritage and love of history (she received undergraduate and graduate degrees in history at Mills College and California State University, San Jose, respectively) inspired her to write historical fiction.

Credited by Library Journal with starting the Scottish romance subgenre, Scott has also won acclaim for her sparkling Regency romances. She is the recipient of the Romance Writers of America’s RITA Award (for Lord Abberley’s Nemesis, 1986) and the RT Book Reviews Career Achievement Award. She lives in central California with her husband. 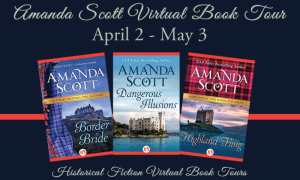