This week, Susanna Calkins introduced A Murder at Rosamund’s Gate, her 17th Century Murder Mystery. If you are reading only a few historical mysteries this year, I recommend please putting this one on your list! The cover will outright lure you in, but the tale itself will hold you in its grasp until the very last pages.

By the first 100 pages or so, in which she introduced her characters, set the scene, and gave us a murderer to ferret out, Calkins was able to already have me feeling connected to her characters, in tune to their personality quirks, captivated by their emotions, and feeling a friendship with Lucy, her protagonist who is a chambermaid in the house of a magistrate.

I loved Calkins use of creative participants such as the painter, gypsy fortune tellers, and other off-beat cast of characters who portrayed the more “seedy” dealings of society the common places, the dirty streets of London, and even in the homes of high society.  Most primarily I liked her use of the murderer leaving “a note” that was found with the body and the use of a legend of the lover’s park. Calkins brought to me, as a reader, fresh characters that many people don’t always use in their historical writings. Her story is original and her characters real.

I felt like I was reading Downtown Abbey mixed with the adventures of the London streets that comes with gossips, servants, drunks, and well….murder, reminiscent of Jack the Ripper. The mystery takes us on a thought-provoking adventure as we see how lives intersect, even between classes, and discover the mystery.  During this journey, we also can sense Lucy gathering an amazing amount of self-confidence and self-worth.

Lucy is quite the female–not overly aggressive, but yet independent. Emotional, yet rational. Analytical, yet compassionate. Virtuous and endearing. I love her!! I hope that Calkins does a series with Lucy, you know the type of character who is always trying to go around living life and saying she isn’t a detective, BUT murder just seems to fall in her lap and she can’t help solving it? (hint, hint)

I don’t want to give too much away, but the murderer probably won’t be who you thought either. She does a wonderful job of leading up to a fantastic finale! I like how Calkins used a smaller cast of characters in a condensed and not overly done setting, which reminded me of some of Agatha Christie’s earlier mysteries. Her character development is superb and her mystery plot exciting and entertaining. I enjoyed guessing the clues along with Lucy.

I am very pleased with Susanna Calkins debut mystery novel and I look forward to much more writing from her. The mystery had an endearing cast of characters, a quaint setting that allowed for a more proper character led plot, a mystery that kept me guessing, a fantastic use of historical details and life struggles, and some great writing that flowed smooth as a pen on paper.

A Murder at Rosamund’s Gate: A Mystery, Synopsis~

When someone she loves faces hanging for the murder of a fellow servant, Lucy Campion—a seventeenth-century English chambermaid—must interpret the clues hidden in miniature portraits, popular ballads, and a corpse’s pointing finger–to save his life, before the true murderer turns on her…

Enter to win one (1) copy of A Murder at Rosamund’s Gate by commenting below or by email to hookofabook(at)hotmail(dot)com by 11:59 p.m. EST 2 weeks from this posting.

For 1 extra entry, follow this blog, for extra 2 entries, join my new Facebook page at www.facebook.com/HookofaBook. U.S. only, please. 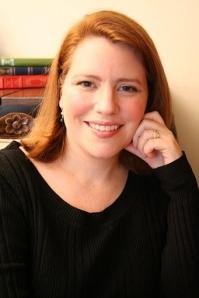 Susanna Calkins is a historian and academic, currently working at Northwestern University. She’s had a morbid curiosity about murder in seventeenth-century England ever since she was in grad school, when she was first working on her Ph.D. in history. The ephemera from the archives—tantalizing true accounts of the fantastic and the strange—inspired her historical mysteries, including A Murder at Rosamund’s Gate (St. Martins Press/Minotaur Books). Born and raised in Philadelphia, she lives outside Chicago now with her husband and two sons.

See the wonderful interview Susanna and I did earlier this week by clicking HERE!!