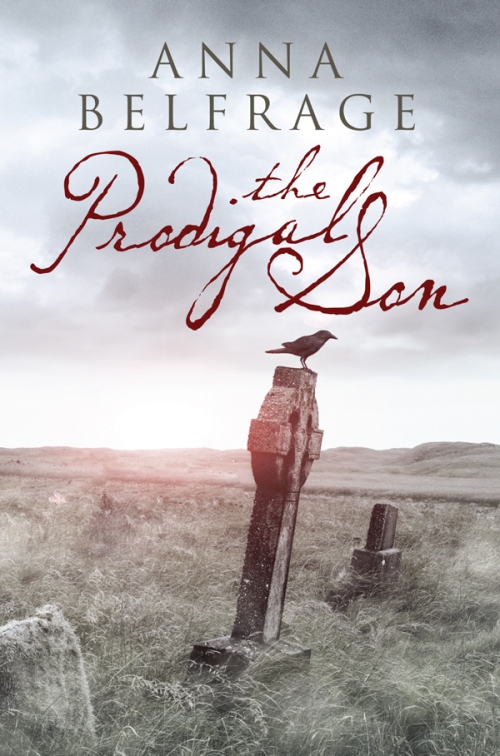 The Prodigal Son is Anna Belfrage’s third book in her Graham Saga series, a story about a time shifted Alexandra (Alex) Lind and her husband, Matthew Graham, whom she marries in the seventeenth century.  In this installment, Anna continues to give us the same well-developed characters, cherished love story, conflicts and resolution, and her usual amazing feelings of hope.

Starting the series with A Rip in the Veil, we meet Alex who is caught in a thunderstorm that suddenly transports her from 2002 to 1658 Scotland where she lands near the feet of Matthew and is thrown into the adventure of adjusting to an entirely new set of circumstances. Even as she is independent and strong, Matthew is stubborn and protective and they fall in love quickly as well as a whole host of other situations.  As we read the second book, Like Chaff in the Wind, Alex and Matthew sail to the New World.  You can read my review of that HERE.

This third book, The Prodigal Son, sets them back in Scotland during a time of much upheaval due to politics and religion, both intertwined at the time. With many people standing up and almost risking their lives to be able to have religious freedom and not conform to the Church of England under Charles II, Matthew puts his life, as well as his family’s in danger, by helping ministers and the cause. One of those ministers he assists is Sandy Peden (who actually existed and was on the run for his religious beliefs almost his whole life), much to Alex’s disdain as she didn’t want her family to suffer for the antics of these people’s fervent beliefs (she doesn’t quite always understand Matthew’s desires and would prefer he stay out of it!).

Though not a religious novel, due to the time period itself being racked with religious zeal and war, it really seeped into every life during this time period following England’s restoration as well as the settling of the American colonies. Men like Anna’s character of Matthew would have felt strongly about holding onto his personal rights at that time, even if it meant hiding “on the run” ministers who were upholding freedom of religion and speech, even as others threatened their lives and chased them down. I enjoyed the times in Anna’s story when Matthew and Alex would discuss religion or actions, even theology with alternate and proposed ideas of God, all as if they were discussing the price of tea, then they’d kiss and declare their love for one another. THAT is the best part of this book for me, by the way, the never-ending, undying love that Matthew and Alex have for one another that knows no bounds.

The worst part for me is that Matthew’s devotion to the freedom of religion cause and helping others does leave a disastrous mark on their family and their life together. It was a chapter of weeping, but I won’t share and spoil the novel. However, it’s sooo sad!!!  It truly tugged at the heart-strings. Again though, it didn’t change their love for one another and there is a chance for rebirth of hope and family.

Another plot point in Anna’s third book has to do with the title (The Prodigal Son), as Matthew’s ex-wife, who was always in love with Matthew’s egotistical brother Luke, comes to their country residence saying she needs to run from the plague, but when she has to leave the son that Luke has declared his, even though it most likely has always been Matthew’s son, Matthew and Ian grow close, only to be torn apart and brought together in an ebb and flow of sorts. It’s up to you to read and see if they are reunited permanently. But you’ll love how Anna’s writes so much emotion into all of the characters; you’ll feel what they feel. She does a phenomenal job of developing characters and she handles, and has Alex handle, the situation with grace and understanding.

Overall, I love the LOVE that spills forth through this novel. I love Alex’s independence, strength, devotion, will, endurance, understanding, plus she learns and adapts quickly! Living in the late 1600s is not easy when you are from the 2000s. I also enjoy her humor quite a bit, her bluntness, and her wit.

I’ve loved Anna’s series so far, and especially The Prodigal Son, and I look forward (not very patiently) for the next novel in The Graham Saga.  I highly recommend this historical series and I personally can’t wait to see where Anna will take the series.  Matthew and Alex are the perfect couple who fit together as two parts of an apple, which really shows us as readers that nothing can stand in the way of love (even 300 years)!

Safely returned from an involuntary stay on a tobacco plantation in Virginia, Matthew Graham finds the Scottish Lowlands torn asunder by religious strife. The government of His Restored Majesty, Charles II, requires all his subjects to swear fealty to him and the Church of England, riding roughshod over any opposition.

In Ayrshire, the people close ranks around their evicted ministers, stubbornly clinging to their Presbyterian faith. But disobedience comes at a price – a very steep price – and as neighbours and friends are driven from hearth and home, Alex becomes increasingly more nervous as to what her Matthew is risking by his continued support of the clandestine ministers – foremost amongst them the charismatic Sandy Peden.

Privately, Alex considers Sandy an enervating fanatic and all this religious fervour is totally incomprehensible to her. So when Matthew repeatedly sets his faith and minister before his own safety and therefore per extension her safety and the safety of their children, he puts their marriage under severe strain.

The situation is further complicated by the presence of Ian, the son Matthew was cruelly duped into disowning several years ago. Now Matthew wants Ian back and Alex isn’t entirely sure this is a good thing, watching from a distance as her husband dances round his lost boy.

Things are brought to a head when Matthew yet again places all their lives in the balance to save his dear friend and preacher from the dragoons that chase him over the moor.

How much is Matthew willing to risk? How much will he ultimately lose?

I was raised abroad, on a pungent mix of Latin American culture, English history and Swedish traditions. As a result I’m multilingual and most of my reading is historical – both non-fiction and fiction.

I was always going to be a writer – or a historian, preferably both. Instead I ended up with a degree in Business and Finance, with very little time to spare for my most favourite pursuit. Still, one does as one must, and in between juggling a challenging career I raised my four children on a potent combination of invented stories, historical debates and masses of good food and homemade cakes. They seem to thrive … Nowadays I spend most of my spare time at my writing desk. The children are half grown, the house is at times eerily silent and I slip away into my imaginary world, with my imaginary characters. Every now and then the one and only man in my life pops his head in to ensure I’m still there. I like that – just as I like how he makes me laugh so often I’ll probably live to well over a hundred.

I was always going to be a writer. Now I am – I have achieved my dream.