Today I have a guest article by Stephanie Carroll, the author of the debut novel, A White Room. Her book has a Victorian Gothic feel and so she discusses what might make a gothic novel, based on her research, and also her opinion on the subject. She asks a few questions of readers at the end of her article, so she’d love for you to take a minute to comment if you’ve read the post. What does “gothic novel” mean to you?

Also, we’ve had a giveaway running for an e-copy of A White Room for a few months (see my review of A White Room HERE and my interview with Stephanie HERE). Please make sure to enter to win by going to her website here: http://www.stephaniecarroll.net/p/the-binding-of-saint-barbara.html and clicking on the Rafflecopter Giveaway under Oh, for the Hook of a Book. Open until August 31, 2013! Best of luck!

What Exactly is The Gothic Novel?
by Stephanie Carroll, Author of A White Room

Reviewers have compared my debut novel A White Room to the classic gothic novels The Haunting of Hill House by Shirley Jackson and Rebecca by Daphne Du Maurier (thank you Oh, For the Hook of a Book!). I was so delighted when this happened because I wrote my novel in a way I felt was reminiscent of gothic fiction, but when I looked at other gothic novels, mine didn’t seem very gothic in comparison. That led me to wonder, what exactly is a gothic novel?

Note:  I’m not an expert on the gothic novel, so I am including my sources for where I got my information, and for you, in case you’d like to do further research.

The Origin of Gothic

The term gothic actually derives from the Visigoths and Ostrogoths (the barbarians) who conquered Rome in the 5th Century A.D. After the collapse of Rome, the world fell into a dark age and the Goths were ultimately forgotten until artists and architects rediscovered Greco-Roman culture during the Renaissance. They began to refer to certain (barbaric) architecture built during the middle ages as gothic even though it wasn’t necessarily built by the Goths. These were castles, mansions, and abbeys, many of which were in ruins.

Writers developed the first gothic novels in England from 1790 to 1830. These works were termed gothic because they took place in and around gothic buildings and architecture. Many themes and conventions developed that also came to define the gothic novel. In addition to usually taking place in a mansion, castle, or abbey, these buildings were often in ruins in the story, which created a mood of mystery and dread because it reminded readers of a world lost, a fallen society, or a world in decay. The hero was usually isolated in some way, and the villain was usually a man who had fallen from grace and represented the epitome of evil.

These novels also dealt with serious real-world fears like murder, rape, and sin, but on an exaggerated level and often times through the supernatural, so the gothic novel also became associated with horror fiction. Some examples of gothic literature from this time period are Matthew G. Lewis’s The Monk and Ann Radcliffe’s The Mysteries of Udolpho.

Another form of the gothic novel came about in the Victorian Era starting in the 1880s (my kind of gothic). The setting, again, played a role and usually involved a large, dark mansion. Like the previous gothic novels, these dealt with frightening real-world themes also on an exaggerated level and with the use of the supernatural. This is when Bram Stoker’s Dracula was written. Victorian fears seen in gothic fiction included insanity, sexuality, incest, and the fear of progress.

At this time, the modern world was quickly advancing in science and technology (automobiles, electricity, etc.) and society had its concerns about the consequences to mankind. This is quite obvious in Mary Shelley’s Frankenstein and Robert Louis Stevenson’s The Strange Case of Dr. Jekyll and Mr. Hyde, which reveal society’s fears by demonstrating the horrors technology could have on the human body.

According to experts, the gothic novel is a cyclic occurrence in literature, something that is revived to express or deal with society’s anxieties.

Gothic culture has boomed in the twentieth century in style, music, movies, and more. The modern gothic novel is a little bit more difficult to pin down though. Some people would argue that the thriving horror and gore genres are our modern day gothic. Others would argue that the modern gothic would be anything similar to the works of Tim Burton, whose dark, macabre style has been a focal point of gothic culture for years.

Yet, if you look around the internet for the modern day gothic novel, you will find all kinds of suggestions. Horror Novel Reviews lists The Body by Stephen King (later made into the classic and awesome film Stand by Me) as a modern day example of a gothic novel. Goodreads lists Kate’s Morton’s The Forgotten Garden. Amazon UK lists The Exorcist by William Peter Blatty.

From what I can tell, all gothic novels in the past were contingent on a few specific elements.

In all of the original gothic novels, a creepy old castle or mansion was in the mix. Now you might be thinking that means only writers willing to set their novels in the past can qualify, but keep in mind that the original gothic authors were placing contemporary characters into a setting that was old and decaying. They weren’t setting their stories in the past when those buildings were in use.

Now, I don’t know if I would go as far as to say that the architecture has to be from the middle ages. The Victorian gothic novel didn’t stick to middle ages architecture, but the setting was usually in a large, dark mansion, which felt reminiscent of that architecture. Or those mansions may have all technically been gothic architecture as there was a gothic revival in architecture in the Victorian Era. However, I don’t have a source that confirms that theory.

Something else that seems to define the gothic novel is the presence of contemporary anxieties that often tap into our darkest fears. In that definition The Body would qualify, but I just can’t accept that movie as gothic because it doesn’t have the dark aesthetic.

What does modern day gothic style, music, and movies prove about gothic culture? It’s contingent on the dark aesthetic. I don’t think that dark aesthetic has to be historical in nature, but I do think it needs to be there in order for something to be categorized as gothic. Now does that mean it needs to be at a Tim Burton level? No! Definitely not! I think the gothic aesthetic can be achieved in many ways, and I’m sure there are all kinds of novels that qualify.

In my opinion, to be truly loyal to the origins of gothic though, a novel needs a traditional or similar setting, dark aesthetic, and themes involving mankind’s deepest, darkest fears. Dealing with those fears using the supernatural is a major bonus.

With that definition a novel like The Forgotten Garden would fit, but how many people would say they recognized it as gothic? And what about novels that only have one of these three aspects—that includes my own novel— or none at all but still seem recognizable as gothic?

Well, one answer is that my definition is totally wrong. =/

It’s called breaking tradition, and what’s awesome is that actually goes back to the tradition of the gothic novel. The original gothic novels were born out of the Romantic tradition in literature, but the authors used the gothic novel to break Romantic conventions and created something brand new. (The Gothic Novel – UC Davis) 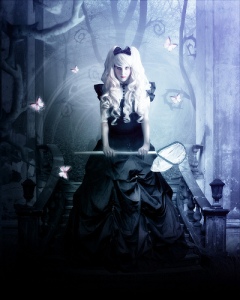 So what is your opinion? What do you think are the modern gothic novels of our day?

What do you think makes a novel gothic at all?

Stephanie writes The Unhinged Historian blog, exploring the dark side of the Victorian Era and Gilded Age, and Unhinged & Empowered Navy Wives for conquering those little moments that make Navy Wives feel crazy. Stephanie lives in California, where her husband is stationed with the U.S. Navy. Her website is www.stephaniecarroll.net.

A White Room is her debut novel.

Advanced Praise for A White Room

“A novel of grit, independence, and determination … An intelligent story, well told.”

—Renée Thompson, author of The Plume Hunter and The Bridge at Valentine

At the close of the Victorian Era, society still expected middle-class women to be “the angels of the house,” even as a select few strived to become something more. In this time of change, Emeline Evans dreamed of becoming a nurse. But when her father dies unexpectedly, Emeline sacrifices her ambitions and rescues her family from destitution by marrying John Dorr, a reserved lawyer who can provide for her family.

John moves Emeline to the remote Missouri town of Labellum and into an unusual house where her sorrow and uneasiness edge toward madness. Furniture twists and turns before her eyes, people stare out at her from empty rooms, and the house itself conspires against her. The doctor diagnoses hysteria, but the treatment merely reinforces the house’s grip on her mind.

Emeline only finds solace after pursuing an opportunity to serve the poor as an unlicensed nurse. Yet in order to bring comfort to the needy she must secretly defy her husband, whose employer viciously hunts down and prosecutes unlicensed practitioners. Although women are no longer burned at the stake in 1900, disobedience is a symptom of psychological defect, and hysterical women must be controlled.

Reminders: Enter the giveaway via link at beginning of the post! Also, Stephanie would love your comments on her questions posted about gothic literature; those are located at the end of her post.