Today, Emma and I have an interview and a fun guest post with popular UK author and former Scholastic editor, Holly Webb! Emma had a great time and super learning experience doing this interview and helping to put the post together. She dictated the questions and thoughts she had to me and I typed them out so they met her approval. So thankful to Holly for giving Emma her first author interview. Enjoy and leave your thoughts in the comments!

Hi Holly, welcome to Oh, for the Hook of a Book!  My daughters (Emma, age 9 and Addie, age 6) are avid readers and both have enjoyed your book, Rose. We reviewed it a few weeks ago and our thoughts can be read by clicking HERE.

Emma is a budding writer and amateur journalist herself, so she has some questions for you! I appreciate your time in discussing writing with us!

Emma:  I like ghost and magic stories, but mostly what I see for my age are other stories of grade school kids that are more average. Your books are different and that is why I enjoyed it. So I would like to know what inspired you to write the Rose series?

A: I was actually asked to write a series about how someone became magical, which I thought was a fascinating question. I also really wanted to try writing something with a historical setting. I particularly love A Little Princess by Frances Hodgson Burnett, which has an Edwardian London setting. I wanted Rose to have the same sense of the city almost as one of the characters. 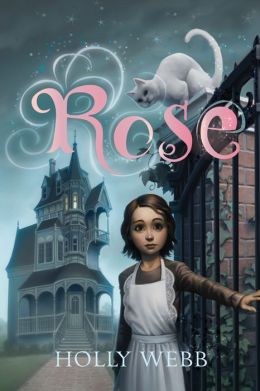 Emma:  My mom says you used to be an editor and that you love books too, but I was wondering what really gave you the desire to write for children? What is the best feeling you get from writing?

A: It was almost an accident that I started writing! I came up with a series idea in an editorial meeting, and the plan was to work on it, and then suggest it to an author. But I realised I’d fallen in love with it, when I’d named all the characters and their pets… Being an editor and working on early drafts of books with amazing authors was a great training for writing. The best feeling is hearing from people who’ve read the books – I love it that children are adding to a world that I wrote. I remember being so involved with my favourite characters – it thrills me that this is happening to my books now!

Emma:  My mom enjoyed your book too, but I was wondering if you’ve written any adult books she might like? If not, would you ever consider writing for adults?

A: I haven’t, but not because I don’t want to. It’s just that I haven’t had a book idea that seems more adult yet. I’d love to write some teen fiction too.

Emma:  I see on your website (I love the design and your book covers by the way) that you have more books, even more Rose books? Is that correct and that means more will be available in the United States for me in the future? I hope so! If so, what kinds of things will Rose do?

A: There are four Rose books – the second one is just being edited for its US edition now. It’s called Rose and the Lost Princess – it’s set partly at the royal palace, where Rose becomes a sort of bodyguard for one of the young princesses. She gets to travel to Venice in the third book, Rose and the Magician’s Mask, and in the fourth, Rose and the Silver Ghost, she discovers more about her family. There’s a sequel series called Lily, too, which Rose appears in as a minor character, fifty years later on.

Emma:  I heard that you like ancient Greek myths. I love them too! Have you considered writing any young adult books with that theme? If so, which one would you start with?

A: I’d love to. I think some of the most amazing stories are the ones with transformations – they’ve inspired a lot of the magic in my books. There are beautiful descriptions of them in a book called The Metamorphoses by Ovid, which I studied at school. I’d find it so hard to choose which of the great stories to write about – Theseus’s travels would be amazing, although I think I’d want to know more about the Minotaur than the hero… My oldest son (who is the same age as you) love myths too. He has been reading the Percy Jackson books, which I think are a brilliant new take on that world.

Emma:  This one is from my mom! In the United States, we are trying to promote literacy. What do you feel are some of the best ways to keep reading alive for children? How do we create an environment and/or foundation for life-long reading?

A: I think reading to your children when they’re little is really important, if you can. I know it’s hard to fit in (I have three children too). My two seven-year olds still go back and read the picture books we read together before they could read for themselves, and that’s very special, even though they enjoy reading longer books too.

Erin and Emma:  Thank you so very much, Holly for creating and writing wonderful books for all youngsters.  We are thrilled you stopped by and allowed Emma to ask you some questions. We hope to read more from you in the future. In fact, Emma took the book to school to read during breaks and all her classmates, boys and girls, were asking to read it! It made quite an impact!

Holly:  That’s so lovely to hear! I love the cover of the US Rose, and I really hope you enjoy her next adventure too. Thanks for such interesting questions. You’ve got me thinking about Greek myths again now, Emma…

That was a great interview with Holly! Now we have a short snippet from Holly pertaining to magical powers she’d love to possess. Do you agree? Feel free to leave in the comments if you have any magical powers you’re waiting to arrive as well!!

Magical Powers I Would Like to Have…by Holly Webb

1) Flying. Oddly enough, this isn’t because I actually want to be able to fly anywhere. I had a recurring dream as a child (and still occasionally now) that I could jump from a particular staircase in my parents’ house (which had a lot of stairs, as it was tall and Victorian, but it was only this one staircase in the dream) and I would be able to float down to the bottom.(Freddie mentions doing this by accident in Rose.) I can still remember the amazing swooping sensation inside, even when I’m awake.  I’d love to be able to do it for real. But I don’t think I’d ever fly very high – I’m slightly scared of heights!

2)  Talking to animals. Because I would love to know what they think. I had a cat and two dogs growing up, and one of the dogs I was very close to. She was a grumpy English Bull Terrier, and we got her when I was seven. She chewed everything, and never learned to walk to heel, but I think that was our fault rather than hers. She and I used to go on long, sulky walks when I was a teenager, and it would have been wonderful to be able to talk to her properly. Although I should think she would have been very bossy. She already had me convinced that she could never walk over sand because it hurt her paws, so whenever we went to the beach, I had to carry her. And she was a big dog…

3) To make things grow. I love the idea of plant magic – the episode in Rose where she accidentally makes the wisteria vine catch her as she’s trying to climb down the wall of the house is one of my favourite bits. I’d love to be able to grow strange plants, flowers that opened up to reveal people, or perhaps secret rooms that you could get into if you were small. I loved the Narnia books as a child (I still do), and the talking animals and the dryads (the tree people) were my favourite parts.

Holly Webb is a bestselling author in the UK with her books Lost in the Snow and Lost in the Storm. As a child growing up in London, Holly fell in love with stories from Ancient Greek myths, which led to studying Latin and Greek and eventually reading Classics at University. She worked for five years as a children’s fiction editor, before deciding to become a writer. The Rose books stem from a childhood love of historical novels, and the wish that animals really could talk. She lives in Reading with her husband and three small children. Visit Holly at holly-webb.com.

How would you know if you were special? The grand mansion of the famous alchemist, Mr. Fountain, is a world away from the dark orphanage Rose has left behind. The house is overflowing with sparkling magic – she can feel it. And it’s not long before Rose realizes that maybe, just maybe, she has a little bit of magic in her, too…

But when orphans begin mysteriously disappearing, Rose is put to the test. Can she find the missing children before it’s too late?

Emma is nine years old and a straight A student with a gift for reading and writing.  She has read at a higher level than her peers ever since the summer between Kindergarten and First Grade when she spent almost the entire summer at the beach. That was also the summer Mom was reading the Twilight series, and took her to see Eclipse at the theater, and Emma found herself loving vampires, werewolfs, and other abnormals when once she was deathly afraid of them.  This newfound knowledge of stories allowed her to overcome her fears and she now sleeps with Monster High dolls by her bed that are the daughters of a Mummy, the Abomindable Snowman, and a Werewolf.

Watch for more of Emma, and her siblings, reviews!  And if you have a recommendation for her, send it her way via Mom (Erin Al-Mehairi).

Filed under Guest Posts, Q and A with Authors