My six-year-old and I have been loving a newly published graphic novel that we found at our local library. It’s called Fairy Tale Comics and includes adapated and fractured fairy tales and illustrations by quite a few amazing cartoonists and edited by the great Chris Duffy. After my introduction and a synopsis and cover of the the book, Addie gives her debut review on Oh, for the Hook of a Book! She is so excited it’s THIS book! Keep reading to see her opinions, which she rattled to me like a professional while I typed like a secretary. 🙂 That’s below….with her photos with the book….but first…my own thoughts….

My daughter soaked up this graphic novel anthology. I often found her carrying it around and reading it after school, gushing over the art and the stories. Finally, I decided to take a few nights to sit down with her and let her read me a few a night until we finished it. We actually took just two nights, as neither of us wanted to stop reading the stories! For six, she has a higher level of reading in comparison to her peers, but it was still great reading practice too.  The stories were simple, but the vocabulary average for educated readers.  I was astounded by the drawings and the selection of fairy tales that weren’t just only Grimm or Perrault adaptations, but some old world stories from other countries as well. I really liked Baba Yaga and Rumplestilzkin in this anthology.  We absolutely adored this shelf worthy, beautiful book. Addie and I certainly made memories reading it together. It would make a lovely gift for children, but also adults who are fairy tale fans!

From favorites like “Puss in Boots” and “Goldilocks” to obscure gems like “The Boy Who Drew Cats,” Fairy Tale Comics has something to offer every reader. Seventeen fairy tales are wonderfully adapted and illustrated in comics format by seventeen different cartoonists, including Raina Telgemeier, Brett Helquist, Cherise Harper, and more.
Edited by Nursery Rhyme Comics’ Chris Duffy, this jacketed hardcover is a beautiful gift and an instant classic.
****************************************

I pretty much liked them all, but some favorites were The 12 Dancing Princesses, Hansel and Gretel, Little Red Riding Hood, Snow White, Rumplestiltzkin, Rapunzel, and Baba Yaga (Mommy’s favorite, which I didn’t want to read at first because I didn’t know it, but then loved it!).  I thought the story Rabbit Will Not Help was a little naughty in how they spoke though.

I’d love a copy of this book to keep on my shelf and I bet other kids would too. It was fun reading and made me want to pick it up each night to read. I would read it over and over. 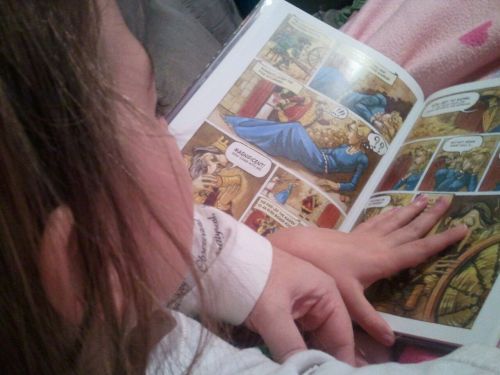 Chris Duffy is a writer and comics editor. He worked as Senior Comics Editor at the award-winning Nickelodeon Magazine for 13 years and currently edits SpongeBob Comics for United Plankton Pictures, as well as other projects.

Chris was part of the board of advisors for Art Spiegelman and Françoise Mouly’s TOON TREASURY OF CLASSIC CHILDREN’S COMICS. His comic book writing includes scripts for BIZARRO COMICS, BIZARRO WORLD, SUPERMAN ADVENTURES, SCOOBY-DOO, WHAT IF?, RUGRATS COMIC ADVENTURES, and BATMAN CHRONICLES.

He wrote comics strips for FAMILY DOG MAGAZINE. Comics that he has written and drawn have appeared in several anthologies, including AWESOME, AWESOMER, and DRAGONS! He lives with his family in Cold Spring, New York.

See more about the graphic novel at:  http://us.macmillan.com/fairytalecomics/VariousAuthors 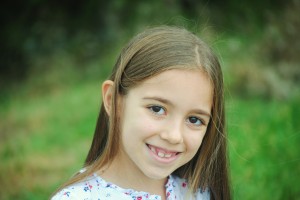 Addison Busbey is a sweet six year old of the intelligent variety. She loves to explore books and relishes her trips to the library and any bookstores where she “oohhhs and ahhhhhs” over covers and content.She loves red and pink and has a penchant for watching anything involving cute animals or princesses. Yet, her current favorite shows are all in the Power Ranger television dynasty. With mommy, she looks forward to watching Scooby-Doo each Saturday morning.  She has quite the wide variety of interests.She enjoys playing softball, soccer, jumping rope, creating art, and baking cupcakes. She has an extreme love affair with shows like DC Cupcakes, Cake Boss, and Cupcake Wars and is constantly inventing new cupcakes for us to bake. She likes to sing and listen to all kinds of music while dancing till she collapses.

She loves graphic novels and quite frequently chooses them, yet also reads chapter books and has a high reading level for her age. She enjoys the art in picture books and comics, yet also likes to get lost in the story of a book or learn something new from a non-fiction read. She really enjoys school quite a bit and is always rushing home to tell Mommy all about it.

She is a fashion queen who dreams of being a fashion designer in Paris, with her own cupcake store around the corner and perform part-time as a pop star. She wants to have a pet squirrel and will most certainly put a pink bow on its tail and make it wear sparkly heels all while having it wear a superhero outfit!

Addison loves all types of books and you can reach her to review your book by emailing her Mommy at hookofabook(at)hotmail(dot)com.