When my friend Jonathan Moore told me he garnered a book deal with Houghton Mifflin Harcourt for a book called “The Poison Artist,” not only was I happy for him, but I was excited for the book, as I loved his debut work, “Redheads,” which was about a serial killer and went on to sling him to the short list for the Bram Stoker Award. I also loved the tension he created in his Random House Hydra dramatic title “Close Reach.” With “The Poison Artist,” I knew this was going to be another mystery rich with a scientific portion, a psychological component, and something dark and gothic to make it uniquely different and put on the stamp as his own.

As soon as I snagged my copy from him, I let it set on display for when I could take the time to really immerse myself in it. I’m glad I did, because I tore through the pages in several sittings and thoroughly enjoyed being held hostage by the story. It will be very hard for any book in 2016 to beat my experience with this one.

This book is one of those that is hard to review in terms of telling you about the plot, because so much of it is wrapped up in allowing it to be a suspenseful mystery. Any little tidbit could lessen the experience for a new reader. However, I will say it’s so much more than what the synopsis lends to it. Yes, it’s the story of a toxicologist, Caleb, caught up in a serial-murder investigation; however, how caught up he is allows us many twists and turns to discover and ponder. When he meets Emmeline one lonely night in a bar, and she shows him how to drink absinthe, seductively, he knows once they part that he must find her again. He’s becomes obsessed.

In this, then, is how the book showcases several mysteries: the case of a serial killer he’s secretly helping Henry, the local coroner, to understand; the police investigation running alongside regarding the same victims, but in their focus they are questioning him as he was in the same bar as one of the men on the night the man was killed; and his own obsession with finding and being with this mysterious woman who dresses like she is from a bygone era, drives a roadster The Black Prince, and enjoys Berthe de Joux by French pour.

The moments with Caleb and Emmeline are captivating. She seduces him and us (as readers) as well. I was hypnotized easily by her voice, the touch of her hand, her style, and most of all, how she used the French pour for her drink. The way Jonathan wrote her in each scene was mesmerizing! I was completely caught up in wanting to know who she was to the point of her becoming a bit real to me.

Jonathan does forensics very well in his novels, this time utilizing a toxicologist and his lab, as well as a coroner, much like any good Patricia Cornwell novel. He’s very serious about his science and extremely technical. He’s done his research. His added suspense techniques reminds me of Lee Child or Alafair Burke. However there is more to the plot of this novel than just forensic science leading a suspenseful chase to a killer.

As Caleb breaks down gradually from stress, and things come to a head from all sides, Jonathan works what I call an original magic. He makes a novel that teeters on the edge of a forensic thriller and puts in seeping suspense and atmospheric conditions, dropping clues and imploring techniques of bait and chase with us as readers. He also creates foreboding and inserts gothic themes by the choices he uses in describing the landscape or surroundings. He properly sets certain props in rooms/scenes to create the atmosphere of a gothic, much as Charles Dickens or Oscar Wilde. You have to be smart to pick them up (or love gothic like me!!). His use of history, art, architecture, and landscape all attribute to madness within the novel, a nod to F. Scott Fitzgerald, and are also reasons I admire it so much. His use of the San Francisco locale, his descriptions of place, as well as hard drink was a bit like Hemingway. I loved how he incorporated a boat and that we were given a birds eye view of the piers of the city. It all blended into a full cinematic experience for me as a reader.

I really wish I could share the plot and the ending with you more. It certainly hasn’t left me. I’ve sat on this review for just a bit and every day I’m still every bit as entranced by the book. Maybe I was hypnotized after all.

Beyond what I mentioned, why does it keep knocking at the back of my brain? There are even more layers to this story, psychological ones I can’t speak of without spoiling. I didn’t really see much of the ending coming and it just blew me away. How he pushed rewind at the end to show us everything was stellar. The book is pristine, dare I say perfection, and ties up tautly its wafting plot, which obviously took an amazing amount of time to piece together in just the right way. I really didn’t want the book to end. It was such sophisticated reading. Luckily, we have another book to look forward to next year.

This book reminded me what REALLY good lasting writing and reading is; especially for fans of Hitchcock, as his dark affects and mild melds mirror this work in regards to his dark suspense elements and pacing. Jonathan has created his best work yet, and I believe, it’s evident of even more extraordinary work to come.

Overall, I was hypnotized, enamored, and moved by this dark mystery and I’ll be haunted by it, and its characters, for some time to come. Jonathan Moore is a complete original in a flooded world bookscape and I highly recommend you speeding this book to the top of your list. As I said at the start, it’s definitely the book to watch for 2016.

“An electrifying read… I haven’t read anything so terrifying since Red Dragon.”
—Stephen King

“Magnificent, thoroughly unnerving…I dare you to look away.” —Justin Cronin 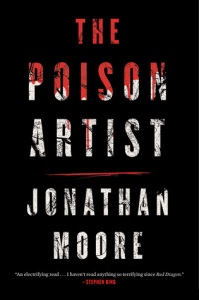 A gripping tale of obsession and deadly mystery, where the secrets of salvation and the most devastating desires are all written in blood

Dr. Caleb Maddox is a San Francisco toxicologist studying the chemical effects of pain. After a bruising breakup with his girlfriend, he’s out drinking whiskey when a hauntingly seductive woman appears by his side. Emmeline whispers to Caleb over absinthe, gets his blood on her fingers and then brushes his ear with her lips as she says goodbye. He must find her.

As his search begins, Caleb becomes entangled in a serial-murder investigation. The police have been fishing men from the bay, and the postmortems are inconclusive. One of the victims vanished from the bar the night Caleb met Emmeline. When questioned, Caleb can’t offer any information, nor does he tell them he’s been secretly helping the city’s medical examiner, an old friend, study the chemical evidence on the victims’ remains. The search for the killer soon entwines with Caleb’s hunt for Emmeline, and the closer he gets to each, the more dangerous his world becomes.

From the first pages up to the haunting, unforgettable denouement, The Poison Artist is a gripping thriller about obsession and damage, about a man unmoored by an unspeakable past and an irresistible woman who offers the ultimate escape. 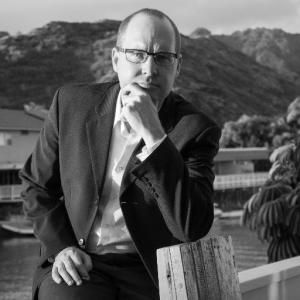 Jonathan Moore is a Bram Stoker Award nominated author of dark thrillers. Redheads was his debut novel, followed by Close Reach. Currently available is The Poison Artist, with two more to come in this series (stand alone, yet featuring one similar character), called The Dark Room  and The Night Market.

Before graduating from law school in New Orleans, he lived in Taiwan for three years, guided whitewater raft trips on the Rio Grande, and worked as an investigator for a criminal defense attorney in Washington, D.C. He has also been an English teacher, a bar owner, a counselor at a wilderness camp for juvenile delinquents, and a textbook writer.

He lives with his wife in Hawaii and are expecting their first child.