Today I have another guest article in the Women in History or Women Making History series to honor Women’s History Month. I’ll be bringing these to you for the rest of March and into April (along with a poetry series). However, Women in History and Women in Horror will basically last all year if I keep getting posts! I hope you enjoying learning about these fabulous women as much as I have been. Your encouragement and shares can really help us show how important women are in our society!

The post is by S.K. Rizzolo, a California author who pens wonderful mysteries from the 19th Century. She has some great thoughts and an informative article about a crucial social reformer of the time in Britain, Caroline Norton, but how interesting to learn she was also a poet (and writer of other fabulous things as well). Enjoy!

We go on living with things as they are for a very long time. Centuries pass while we remain trapped in the same old, tired, frozen mindsets that cause so much pain, so much injustice. We cannot seem to overturn things as they are. Perhaps this is because many people (hint: often the ones who most benefit) embrace these systems as natural, inevitable, and moral. Such modes of thought are difficult to question, incredibly tough to shatter.

Just think of the pernicious attitudes toward women that continue to debase our own society. Women have long struggled to achieve full personhood under a belief system that views them as less worthy, less autonomous, less human. But as the recent #MeToo movement has shown, change is possible, and it often starts with a few voices daring to articulate a new truth and inspiring others to participate. I’m sure that speaking out has demanded immense courage from the women challenging the pervasive reach of the patriarchy. There are always risks involved for those who imagine a new and better way. One thing is clear, however. This new way requires a fresh mindset that breaks the chains of the past.

Yes, we look forward. But it seems to me that in the process of reframing the world, using our newly purified perception to form healthier and more just social relations, we must also look to the past and to the women who helped get us here. So today I want to tell you about a foremother who lived in 19th century England, surely an era in which a frozen mindset held many in thrall. It was a time in which respectable women were relegated to domesticity. They were to be selflessly devoted “angels in the house,” while men were free to strive actively for achievements in the public sphere. But neither custom nor law provided for the woman who married a brute or whose marriage crumbled, leaving her without support.

Caroline Norton (1808-1877) was a campaigner and social reformer as well as a poet, novelist, and playwright. Pressured by her mother into marrying a violent drunkard at the age of 19, she became a wife whose husband had the power to abuse her, take her earnings, and ruin her reputation. And she became a mother who was legally deprived of her young children after she separated from this man. To give just two examples of what she faced, her husband—the Honorable George Norton, barrister and M.P—beat her when she was pregnant with their fourth child, causing her to lose the baby. In 1836 George Norton also sued Caroline’s friend, the Whig Prime Minister Lord Melbourne, for a vast amount of money, accusing him of “criminal conversation” or adultery with his estranged wife. Melbourne was acquitted, but the scandal ruined Caroline. And after the trial she discovered that the law did not allow her to obtain a divorce.

Although she never regained custody of her three sons because of George Norton’s implacable revenge, this personal tragedy led her to social activism. Her efforts were a huge factor in the passage of the Custody of Infants Act of 1839, which was a first step in establishing the rights to our children that mothers rely upon today. Because of this law, for the first time divorced women (“of unblemished characters”) could petition the court for custody of their children under seven and had rights of access to their older children. Later, Caroline was instrumental in securing the passage of the Matrimonial Causes Act of 1857, which made divorce more accessible. And she helped lay the groundwork for the 1870 Married Women’s Property Act, which allowed married women to retain their earnings and inherit property.

All this was possible only because Caroline was willing to challenge the orthodoxies of her time. She petitioned Parliament and Queen Victoria and wrote pamphlets and letters to the newspapers to protest a state of affairs in which “a married woman in England has no legal existence: her being is absorbed in that of her husband.” No legal existence. These words erase the self and sound to me like the slamming of the prison cell door—a door that Caroline found a way to crack open. You can’t exactly call her a “feminist,” though I don’t think the label matters. She was of her time, stating that “the natural position of woman is inferiority to man…I never pretended to the wild and ridiculous doctrine of equality.” In my view, this just shows the power of any era’s prevailing mentality and makes Caroline’s accomplishments the more remarkable.

Watercolor sketch of Caroline Norton, 1860. Attributed to Mrs. Emma Fergusson. Wikimedia Commons. I like this softer, more intimate portrayal of an older Caroline.

George Hayter’s 1832 portrait of the Honorable Mrs. Caroline Norton. Appropriately, Norton is shown with an open book and pen in hand. She and her two sisters, the granddaughters of the playwright Richard Brinsley Sheridan, were famous society beauties in their day and were known as “The Three Graces.” Wikimedia Commons.

Today Caroline Norton is mostly remembered for her work as a reformer, but I want to end by celebrating her as a writer and poet. Somehow in the midst of her marital struggles and her grief over the loss of her children, she managed to produce over a dozen poetry collections, five novels, and two plays. Not content to stop there, she was even the leader of a literary salon and the editor of a fashionable women’s magazine! How hard it must have been for her to persevere in her ambitions. Indeed, Caroline acknowledged as much when she wrote to her friend the author Mary Shelley: “Does it not provoke you sometimes to think how ‘in vain’ the gift of genius is for a woman? How so far from binding her more closely to the admiration and love of her fellow creatures, it does in effect create that gulf across which no one passes.”

Well, I hope we can step across the gulf to honor Caroline and assert that her gift was not in vain, no matter what she thought in any moment of despondency, no matter what cultural, physical, and mental chains her society had forged to bind women.

Rattling within its hollow shell;

You cannot ope my breast, and put

Any thing fresh with it to dwell.

The hopes and dreams that filled it when

Are gone! and ne’er with joy or pain

That shrunken heart shall swell anew.

From “My Heart is Like a Withered Nut” by Caroline Norton

An incurable Anglophile, S.K. Rizzolo writes mysteries exploring the darker side of Regency England. Her series features a trio of crime-solving friends: a Bow Street Runner, an unconventional lady, and a melancholic barrister.

Currently she is at work on a new novel introducing a female detective in Victorian London. Rizzolo lives in Los Angeles with Oliver Twist and Lucy, her cats, and Michael, her husband. She also has an actress daughter named after Miranda in The Tempest.

Here is the book cover and synopsis to S.K.’s latest book in her series, On a Desert Shore, of which I reviewed a few years ago HERE. 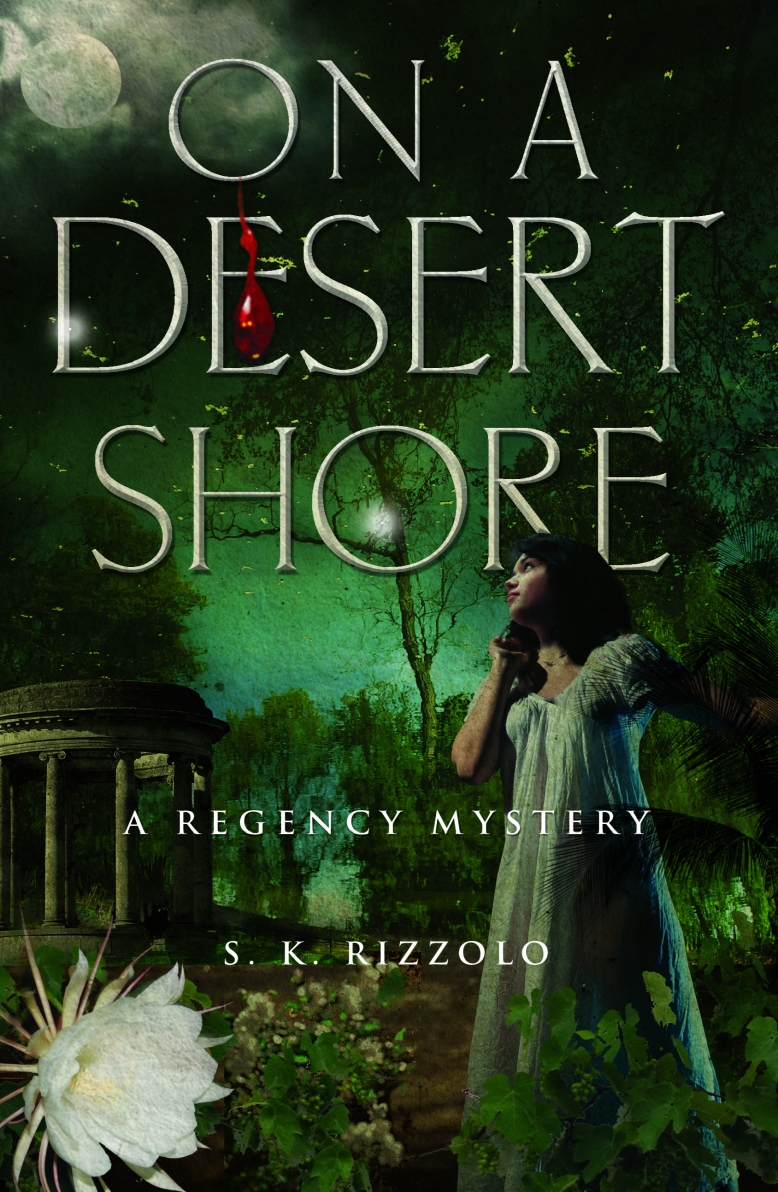 London, 1813: A wealthy West India merchant’s daughter is in danger with a vast fortune at stake. Hired to protect the heiress, Bow Street Runner John Chase copes with a bitter inheritance dispute and vicious murder. Meanwhile, his sleuthing partner, abandoned wife Penelope Wolfe, must decide whether Society’s censure is too great a bar to a relationship with barrister Edward Buckler.

On a Desert Shore stretches from the brutal colony of Jamaica to the prosperity and apparent peace of suburban London. Here a father’s ambition to transplant a child of mixed blood and create an English dynasty will lead to terrible deeds.

Visit her on her website where you can also view her books.

Keep following us for more guest articles about Women in History or Women Making History throughout March and April.