Review: Without Condition by Sonora Taylor

When Sonora asked me to blurb her new book, which is her first foray into writing a horror novel, I said yes without any hesitation! Sonora is someone who is involved in the Ladies in Horror Fiction Project (run by Nina D’Arcangelo) with me and I enjoyed her flash fiction. Without Condition was something I was anticipating to read as I followed her final progress on it, and now, it released to the world today!

I pleasantly discovered while reading it though that it had many more layers than I originally thought. Not only is it horror but has lots of dark romance as well, and while romance is not usually my thing, it fit in well with this story and I enjoyed it. If you have a dark Valentine, this might be perfect for the big day this week.

If King’s Carrie had turned into a serial killer, and your setting was the backwoods country life, you’d have Without Condition. It’s a murderous mayhem of revenge and fix culminating in horrifying shows of unconditional love. I’ll never look at a beat-up old truck without apprehension again.

Yep, that my main blurb I provider her, but I wanted to take a moment on my site here to offer a few more thoughts. Overall this novel is a simmering read that is a character-study on the female protagonist, Cara. The novel deals with her dark side, the relationship she has with her enabling mother, and then her romance with a man she falls for (which is rare, as she really only has loved two men in her life – this new boyfriend and a past uncle who she felt abandoned her, even if he gave her his knife and taught her at an early age how to wield it). It’s a horror novel dealing with a serial killer, but it’s also dark romance, and there isn’t as much pages of action as there is fullness of story.

The novel to me deals with themes of bullying, revenge, loneliness, abandonment, simmering rage, and even LGBT+. It also deals with love and acceptance. But don’t get me wrong, Cara is not one to be messed with and so there are some violent scenes as well! How Sonora writes them makes us feel that it’s normal for Cara to be doing them! As a writer who has written dark scenes myself of women exacting revenge on men, I was a little cheering her on. I thought Sonora did this very well and captured her feelings on the page – so she had great character development with Cara. I could watch her vividly as through a lens. I could feel when she needed a “fix” – stress relief through killing.

I also loved her descriptions of setting in the backwoods of North Carolina. It was somewhat new to me, the reading of a book where I could visually something so modern day southern, but growing up rurally myself, it was also relatable in some ways from things I see and people I’ve encountered. It was very authentic in its details and nuances and helped to carry her plot along well.

If anything, I feel she could have fleshed out the boyfriend character a bit more. I was unsure of him and how or why she fell for him so hard. I wanted him to be more memorable. But overall, the ending with him and her was interesting, though a little bit flipped me on my head too – it was more diabolical than I anticipated, but it worked well! I’m interested to see just where they’d be headed in the next ten years.

Thanks so much to Sonora for sending me an advanced copy! It’s perfectly error-free to my eye and is a testament to self-published books – many are done well and you won’t know the difference. It’s polished, edited well, and her original cover art done by artist Doug Puller (who I believe did her interior book and e-book design and formatting as well).

Have some dark murder and romance for your Valentine’s Day this year! Also, I’ll have two interviews with Sonora coming up this month in which you can get to know her better – right here at Hook focusing on the content of her book as well as one on The Horror Tree which focuses more on writing. 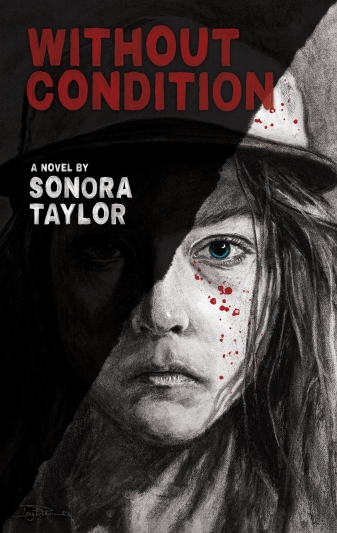 Cara Vineyard lives a quiet life in rural North Carolina. She works for an emerging brewery, drives her truck late at night, and lives with her mother on a former pumpkin farm. Her mother is proud of her and keeps a wall displaying all of Cara’s accomplishments.

Cara isn’t so much proud as she is bored. She’s revitalized when she meets Jackson Price, a pharmacist in Raleigh. Every day they spend together, she falls for him a little more — which in turn makes her life more complicated. When Cara goes on her late-night drives, she often picks up men. Those men tend to die. And when Cara comes back to the farm, she brings a memento for her mother to add to her wall of accomplishments.

Cara’s mother loves her no matter what. But she doesn’t know if Jackson will feel the same — and she doesn’t want to find out.

Purchase Without Condition on Amazon

Read the first chapter, “Dead End,” in Issue 42 of The Sirens Call

Shelve Without Condition on Goodreads

Sonora Taylor I the author of The Crow’s Gift and Other Tales, Please Give, and Wither and Other Stories. Her short story, “Hearts are Just ‘Likes’,” was published in Camden Park Press’s Quoth the Raven, an anthology of stories and poems that put a contemporary twist on the works of Edgar Allan Poe.

Her work has also been published in The Sirens Call, a bi-monthly horror eZine; and Mercurial Stories, a weekly flash fiction literary journal. Her second novel, Without Condition, release February 12, 2019. She lives in Arlington, Virginia with her husband.