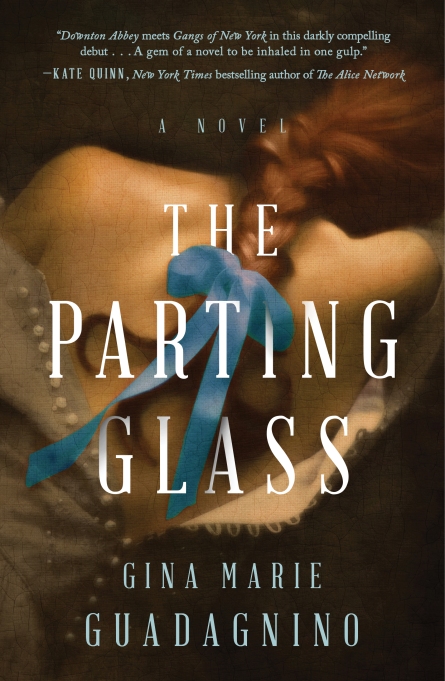 With St. Patrick’s day not long behind us, and it still being women in history month, I have a review of the recently released The Parting Glass by Gina Marie Guadagnino, which features Irish-American characters. Last week, I posted an interview HERE on the site with the author as well, which will give you more insight into her book and the processes to her publishing it. I’d suggest going back and reading that if you haven’t after you take in this review. I believe the author is currently in Ireland, so I can’t wait what she uncovers to write about next.

The Parting Glass is the new debut historical fiction novel from Gina Marie Guadagnino and published by Atria set in 19th century New York City. It delves into themes of Irish-American immigrant life, and worth nothing in my own quest to support inclusivity in art, that it has LGBTQ+ themes in regards to featuring lesbian characters.

Generally I don’t often think there is a reason to single out the sexual orientation of characters, but since it’s an historical time period as well as a deep part of the characters and their interactions with each other and the times, I think it’s important to identify it as a key part of her work. It’s been called reminiscent of Sarah Waters, and I agree to some degree, because she handles her characters with great emotion and care.

Mary Ballard is an Irish handmaiden who falls in love with the lady she assists, who happens to be herself in a forbidden-type of tryst with the Irish brother of Ballard, who works in the stables. Yep, cue drama. Mostly for Mary Ballard, whose heart pines to frustration. It’s forbidden (what? all of it) in the 19th century, of course, in an upstairs/downstairs sort of way first of all, as Ballard and her brother are hired help, and Charlotte Walden is aristocracy living in Washington Square (the area of the rich who hired low-wage labor). The lesbianism would be frowned upon too, but that’s the heart-wrenching part too, as it’s unrequited love. Cue more angst in here.

Also racism is heavy at work during this time period, though it’s coming to the tail end of it (kinda? I think it’s still going on now), so the climax is heated as the Nativists and the No Nothing Party spew hatred against Catholics, Irish, immigrats as a whole. There is also a lot of corruption and gangs. That’s why some people liken this to part Gangs of New York. I get that.

Guadagnino has done a tremendous amount of research and it shows in her writing, which is beautiful and captivating both. Her historical details are plenty and give a solid foundation for the story to unfold and the well-developed characters to flourish. The best developed was Mary of course, both sides of her personalities as you’ll come to read, but Charlotte needed some work to not be sterile (even if high society ladies may have seemed so at the time, she was rebelling and have sex with the stable hand – his character also ignited by the fact he is leading an Irish gang).

Given the lush and vivid descriptions of this area of NYC, it’s obvious Guadagnino knows, loves, and has researched the history of it extensively. The setting is a marvelous backdrop for which the story unfolds with some twists and turns amid the drama. I truly enjoyed the imagery she presented to the reader with her engaging prose.

In wearing my editor’s hat, I’ll note that though it was clean, lush, descriptive, and a dramatic, enjoyable read, it does what so many traditionally published debut historical fiction books do, and that’s possibly try to do too much and not be able to wrap up all the intertwining plots quickly enough by the ending page count a publisher wants. It could have been strictly a romance or a strictly a take on the Irish immigrant issue of the day, because there was enough plot to both. If I was to offer suggestions, I’d have played up the latter and toned down the romance and the focus on the maid living this dual life, or picked one or the other of the sister and brother to focus on. But that is just a small suggestion in the whole scheme of the book.

If you want a 19th century romp in NYC, with drama among the class system, a woman’s journey to self, and a lesson in Irish immigrants and their plight, this book will be a steamy and interesting read for you. Guadagnino definitely knows her Irish-American history and culture and how it intertwined with others in this time and place. Her love of NYC is undeniable. There aren’t many historical fiction books out there that I know of that use the Irish-American culture in their narratives and I am glad to see her rise to the occasion as there are so many stories to tell and create!

Highly recommended as a unique, cultural yet entertaining read that will tug at your heart strings and leave you breathless by the end.

Will a brother and sister’s steadfast vow withstand their wild devotion to the same woman? THE PARTING GLASS, a tempestuous nineteenth century love triangle threatens all that one secretive servant holds dear, is Gina Marie Guadagnino’s lush and evocative debut.

Posing as a lady’s maid in 1837 New York City, Maire O’Farren must tread carefully. The upper echelons of society despise the Irish and Maire, known to her employers only as Mary Ballard, takes great care to conceal her native lilt and lineage. Nor would the household be pleased with a servant who aids her debutante’s midnight assignations with a stable groom. Least of all would they tolerate a maid who takes a stronger liking to her charge than would be deemed entirely suitable for her sex.

Maire tends to wealthy young heiress Charlotte Walden’s every whim and guards her every secret. Though it pains her, Maire even delivers her brother Seanin to her beloved’s bed each Thursday night, before shedding her clandestine persona and finding release from her frustration in the gritty underworld around Washington Square. Despite her grief, Maire soon attracts the attentions of irreverent and industrious prostitute Liddie Lawrence, who soothes Maire’s body and distracts her burning heart.

As an English baron and a red-blooded American millionaire vie for Charlotte’s affections, Seanin makes calculated moves of his own, adopting the political aspirations of his drinking companions and grappling with the cruel boundaries of class and nationality. As Seanin rises in rank in a secret society and the truth of both women’s double lives begin to unravel, Charlotte’s secrets soon grow so dangerous even Maire cannot keep them. Forced to choose between loyalty to her brother or to her lady, between respectable society or true freedom, Maire finally learns that her fate lies in her hands alone.

Gina Marie Guadagnino received a BA in English from New York University and an MFA in Creative Writing from the New School.

Her work has appeared in the Morris-Jumel Mansion Anthology of Fantasy and Paranormal Fiction, Mixed Up: Cocktail Recipes (and Flash Fiction) for the Discerning Drinker (and Reader).

She lives in New York City with her family.

Praise for The Parting Glass –

“Downton Abbey meets Gangs of New York in this darkly compelling debut. A claustrophobic love triangle of stifled desire and class warfare plays out to deadly, devastating effect. A gem of a novel to be inhaled in one gulp.” —Kate Quinn, New York Times bestselling author of THE ALICE NETWORK

“Knotted thickly with secrets both fervid and calculating, to read THE PARTING GLASS is to enter a jungle of passions and lies. Immaculately researched and gorgeously written, this book is noteworthy for its grasp of the agony caused by hiding cracks in the human heart. A thoughtful, lyrical, sensuous, moving tour-de-force.” —Lyndsay Faye, author of JANE STEELE