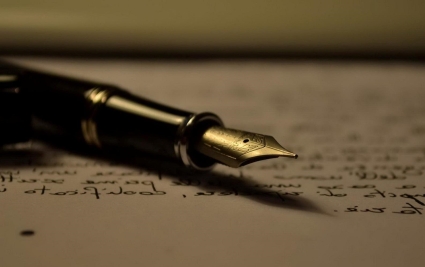 On this last day of May, and to round out mental health awareness month, I have another great poet and poem to share with you all. Donna Lynch is a dark fiction writer and the co-founder—along with her husband, artist and musician Steven Archer—of the dark electro-rock band Ego Likeness (Metropolis Records). She has written numerous poetry collections, including Witches, which was Bram Stoker Nominated this year.

A word from Donna on writing about mental health topics:

“There’s nothing creative or interesting about mental illness. It’s a disease that doesn’t just consume you, but takes with it everyone who gets too close. People sometimes say, “But maybe it’s your experiences that make you see the world the way you do and give you that creativity,” and I point out to them that I write about people being haunted. I write about loss and violation and madness. I write about nightmares and the way your body can turn on you. I would give anything to not have the experiences that make me see the world that way, but since medicine and therapy can only do so much, I figure I may as well try to capitalize on it a little. But the bottom line is that disease doesn’t want to see you succeed or thrive, so I write in spite of my pain, not because of it.”

Donna is a really cool person and a talented creative. I’ve had the pleasure of reading poetry with her at a virtual reading and I can tell you, her work can make you shiver. This seven-part poem will be featured in Donna’s next collection, Choking Back the Devil, coming from Raw Dog Screaming Press on July 17, 2019!

I’m thrilled to offer you a first look!

and don’t ask why or how

when they end up in you like a thousand shards of glass and splinters.

You miss the joke.

Spend a lifetime hiding from monsters and you blind
yourself to the ones inside of you.

you are hollowed out.

chased through the woods by a man, or something
resembling a man,

wielding a rusted tool from the shed that you know will not
be quick nor painless.

Something that will hurt in a way you can’t prepare for.

on the ankle you just sprained in a divot.

If you hear that snap, it will be over faster.

The running, that is. Everything else will have just begun.

You listen and wait. The snapping is sticks, not bones.

with the cramping in your side,

and lungs that feel like you’ve inhaled winter razors.

You’d be so wrong.

You’re about to find out.

with no sense of direction

But unlike the man with the rusted tool, you have not
trained for this.

As a child, you never thought,

When I was a child, I never thought I’d need to run.

I only knew I needed to hide,

so I became a ghost.

But I was not trained to run,

Breeds like me are broken in, but not in the fields,

not on the trails.

you can only run so far before you have to stop.

And it’s upon you now, which brings us back to the hollowing.

The hollowing out of a person,

is not the desired end result.

It’s the kitchen counter full of pink fluids and glistening bits on Thanksgiving.

It’s filling and stringing up a pinata.

It’s turning a canyon into a landfill.

and re-filling the cavity with even worse decay.

You are your own Pandora’s Box.

Every ugly thing needs a home, and the space inside your
head works nicely.

The space inside your chest…

you can fold it,

until you can barely tell it isn’t the entrails you started with.

So there you are,

strung up in the shed.

You can see the things that used to be inside you in a tub in
the corner.

Someone or some thing will eat them and they will be gone.

You mourn the loss of these things, because you don’t
realize there is something else in you now,

You think you are empty,

and this is how you will justify everything to come.

It was the loss.

It was someone you loved,

and because you loved them,

when it was time,

you made the decision.

but you were not trained for it.

Because where will you go?

and the really excellent hiders.

It is real when the light goes out in someone you love.

There is a flash of terror in your head,

for yourself, and for them…

You carry what’s left of them home in a plastic bag with a
hard handle.

How can you even tell?

Because it’s just a container of entrails, of insides,

to be consumed, in time.

All of it will end up in a container. A coffin, an urn, that
empty space in your chest.

And you wait and wait

to feel something again.

Take in all the empathy,

all the sympathy while you can.

The well-wishes, the visitors, having your erratic behaviors
excused and tolerated take it all.

the way enzymes break down,

there will be no more.

Here’s where the story changes.

No more tool sheds, no faceless men hunting you.

Now we are in the realm of demons.

Possession by an entity of no discernible origin.

It all looks normal, a normal setting, on any given normal day.

The storm has passed, and that means it’s all right, right?

If you don’t look anyone in the eye, no one will know.

At least for a while.

If you let it in and let it out as it pleases, and don’t fight, it
will come and go with little fanfare.

It is, of course, filling you with poison, consuming the
poison, regurgitating
the poison, on and on forever, until you are nothing but a
toxic canyon.

You keep the outside pretty, for desperate, selfish tourists.

They’ve come to see the sights.

Lies for miles and black-out skies you’ll never remember,
because your damaged brain never filmed it.

The thing swimming in your empty shell tells you to be glad.

It’s one of the two kind things it will ever do for you.

Like when the person who just violated you, gives you a
tissue to dry your tears.

you were quiet and harmless.

A spectral woman who weeps quietly in a child’s bedroom,

or the child, itself,

It doesn’t even know it should be angry.

But now you are different.

The thing that possessed you isn’t slipping in and out so
easily now.

It’s tearing holes where there were none.

It’s chewing through what’s left of you.

It’s biting at your feet and legs when you walk by the bed.

It’s digging at you with a blunt, broken nail, rolling up strips
of skin like wood shavings.

It’s slamming into you, full force, the second you close your eyes.

It slams out the same way,

You come home battered. You wake up bruised.

But there’s no assailant.

All anyone can see is you.

You are a different sort of ghost,

haunting yourself until you cross the borderline and die a
second death.

You only have to take this one step.

Maybe it’s off a bridge, or maybe it’s out the door.

It doesn’t really matter—the outcome is going to be the same.

But you still believe there are greener pastures on the other side.

On the other side, you’ll feel better.

The poison will drain.

The canyon will become a lake, filled with water,

cold and clear from some (in)eternal spring.

Then the demon, the entity that possessed and poisoned
you does the second kind thing—

It tells you what a stupid cunt you are for believing there
was ever a spring,

or anything other than the pain you’ve been hiding from
your entire life.

And that’s when houses start shaking, and walls start
bleeding, and screams start emanating from the cellars,
and you have to grab what’s left of your family and the
pets and run and run and run like hell.

You start praying to a god you don’t even believe in
anymore, all the while knowing that the scene unfolding
before you, threatening to destroy everything you ever
loved, was created by you.

You approached the Event Horizon.

You crossed the borderline.

And the real punch in the gut is

All that running you did—

When you never had to take more than one step.

Donna Lynch is a dark fiction writer and the co-founder—along with her husband, artist and musician Steven Archer—of the dark electro-rock band Ego Likeness (Metropolis Records). Her written works include Isabel Burning, Red Horses, Driving Through the Desert, Ladies & Other Vicious Creatures, Daughters of Lilith, and In My Mouth. Lynch’s poetry collection Witches was nominated for a Bram Stoker Award. She and her husband live in Maryland.

Choking Back the Devil, Info –

Choking Back the Devil is horror author and musician Donna Lynch’s seventh poetry collection and the follow up to her Bram Stoker nominated collection Witches (2018). This new collection explores the horror of losing control of mind, body, and autonomy through death, hauntings, violation, mental illness, violence, and the demons in our brains that terrorize and tempt us all.

Thanks for joining us. 🙂 Also, if you want to keep reading, you can read more poetry from April and May over on my Poetry page.