Loren Rhoads Talks About California Wildfires and the Charity Horror Anthology to Raise Money for Relief: Tales for the Campfire

Hello, long time no see. Today Loren Rhoads is here with us to talk about California wildfires and the new anthology put together in order raise funds for relief efforts, Tales for the Campfire. Loren is a fellow writer and editor in the horror genre. You may have seen her here on Hook of a Book before talking about cemeteries and their hauntings. She’s a Bram Stoker nominated editor and is best known as an author, I think, for her 199 Cemeteries to Visit Before You Die. Recently, she compiled/edited an anthology for charity called Tales for the Campfire in hopes of helping those in need from the wildfires in California.

One day, her local California Horror Writers Association chapter asked what they could do to ease the suffering of people who lost everything to the fire: pets, livestock, vehicles, homes, friends, family members, businesses, livelihoods, their entire community. HWA member Ben Monroe suggested that they put together an anthology of stories to raise money for the relief effort.

The rest of how it came together, you’ll read about near the bottom of the article, but first you’ll learn about how devastating wildfires are to those in places like California and just from a small little spark or campfire or dry season. I hope you’ll find the article as interesting as I did! And scary!

If you’re touched to help, you’ll find the links to purchase the anthology below too. Please spread the word for a good cause. Thanks for stopping by!

by Loren Rhoads, author and editor of Tales for the Campfire

One summer while I lived in Ann Arbor, I found my friend Jeff glued to the 24-hour news channel. His parents’ house, atop a hill in Los Altos Hills, California, had been on TV. I’d spent spring break there one year. It was a lovely house, full of art his parents had collected on their trips around the world: a gracious, welcoming place, with views all around it.

The house stood near an open space preserve, where Jeff had once seen a bobcat. Deer often wandered his parents’ neighborhood. Red-tailed hawks circled overhead.

Jeff had seen his parents’ house on TV because a wildfire was racing across the open grassland. Only one road led into his parents’ neighborhood — and it was blocked by firetrucks that could not drive into the narrow hiking paths of the nature preserve.

Jeff’s dad had left for work early that day. Jeff’s mom was trapped at home, watching the smoke boiling up over her house. She planned to jump into the pool if the fire came. While she waited, she was spraying the citrus trees and rosebushes with a garden hose, trying to wet everything down so it wouldn’t catch a spark. Luckily, in the end, the fire was extinguished before it reached the houses. 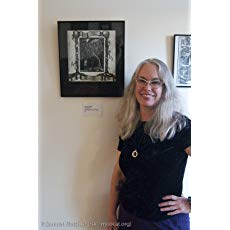 One morning while we were in Paris to celebrate my birthday, my husband picked up an International Herald Tribune. A paragraph-long report said that wildfire raged through Oakland, California, the city across the bay from our new home in San Francisco.

We scoured the city to find a copy of the San Francisco Chronicle. The photos showed smoke towering miles high over the Oakland Hills. The hillside houses looked like matchboxes in comparison.

When we returned from our trip, friends who lived in Oakland told us about the fire. One friend in the Rockridge neighborhood had evacuated. Mike lived not far from Mountain View Cemetery, which lay between his home and the fire. He hoped the graveyard would provide a firebreak. For days he lived on a friend’s sofa, calling his own home phone over and over. As long as the answering machine picked up, he knew his house remained standing.

In October 2017, I woke in the night and smelled smoke. There was only a tickle in the air, but something, somewhere, was burning. I looked out all the windows, but didn’t see an orange glow in the sky. Wind rampaged around the house. I slept fitfully on the sofa for the rest of the night.

In the morning, the news reported a fire far away in Lake County. It expanded as it spread into Napa County. Another fire started in neighboring Sonoma County. The fires were more than 70 miles away. I didn’t know smoke could travel that far.

In her home in Santa Rosa, California, my friend Kim packed the most important things in her life and prepared to evacuate. She spent days sheltering in a local high school gym. The power had gone off at her home, so she didn’t even have the reassurance of calling the answering machine.

At first, no one could really believe that a city could burn down. Unlike Los Altos Hills, there was no massive grassy park nearby. Unlike the Oakland Hills, Kim didn’t live in an overgrown neighborhood with winding roads too narrow for firetrucks. She lived in a suburban neighborhood, in a grid of streets.

In the end, Kim’s home escaped the fire. Neighborhoods surrounding hers weren’t so lucky. She drove through the devastation to find her house still standing. Although she’d closed the windows before she fled, everything inside her home was covered with fine grit — the ashes of trees and homes and wildlife and 22 people. More than 5600 structures were destroyed by the Tubbs Fire.

In November 2018, a failing powerline in Butte County, California sparked the Camp Fire. Driven by 60 to 70-mile-an-hour winds, the fire spread so fast — devouring 10 miles of forest in 10 minutes — that people were trapped in their cars as they tried to escape. Some people panicked and abandoned their vehicles to try to outrun the flames on foot.

The fire burned for 17 days. The smoke it generated was visible from space. That smoke flowed through the Altamont Pass, 150 miles away, into the San Francisco Bay Area. Because of a weather pattern called an inversion, the smoke, trapped by the hills surrounding the bay, settled to ground level.

For a week, San Francisco had the worst air quality in the world: worse than Beijing or Mexico City. Worse even than in the fire country itself. The air became visible. It glowed a malevolent yellow as sunlight reflected from nearly invisible particles in the air.

Many places gave away painter’s masks to prevent people from breathing in the ashes and grit in the air. Then we were told that painter’s masks didn’t actually screen out the smallest particles, which could lodge in your lungs and could not be removed. People were warned to stay in their houses. Theaters closed. Schools closed. Businesses closed.

The empty streets of the city looked like the apocalypse had come — and we were 200 miles away from where the fire was burning.

In the end, 89 people were killed by the Camp Fire. Six months later, more continue to be missing. The entire town of Paradise, California was scoured from the map. Twenty thousand people were left homeless.

My local Horror Writers Association chapter asked what we could do to ease the suffering of people who lost everything to the fire: pets, livestock, vehicles, homes, friends, family members, businesses, livelihoods, their entire community. HWA member Ben Monroe suggested that we put together an anthology of stories to raise money for the relief effort.

I volunteered to assemble and edit the book. E.M. Markoff volunteered Tomes & Coffee Press as publisher. Ben contacted Petersen Games, who donated an amazing piece of artwork for the cover. He found a cover designer who would work pro bono. He also spoke to the estate of Clark Ashton Smith, who donated one of the master’s short stories.

Tales for the Camp Fire: A Charity Anthology Benefiting Wildfire Relief ranges from fairy tale to science fiction, from psychological terror to magical realism, from splatterpunk to black humor, all rounded out by a post-apocalyptic cookbook entry. Through these pages roam werewolves, serial killers, a handful of ghosts, plenty of zombies, Cthulhu cultists, mad scientists, and a pair of conjoined twins.

As I write this in early June, Tales for the Camp Fire has been out a month. The profit from every copy we sell goes to the North Valley Community Foundation, a clearinghouse that distributes funds to the communities shattered by the fire.

Tales for the Campfire, Info  – 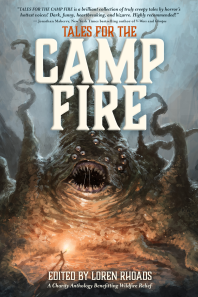 Scary Stories for a Good Cause. From Bram Stoker Award-nominated editor of the cult magazine Morbid Curiosity comes Tales for the Camp Fire, a new charity anthology of short stories to help support wildfire relief efforts.

Through these pages roam werewolves, serial killers, a handful of ghosts, plenty of zombies, Cthulhu cultists, mad scientists, and a pair of conjoined twins.

In November 2018, fire broke out on Camp Creek Road and raced through Butte County, California. By the time the fire was extinguished, the town of Paradise had been scoured from the map. Nearly 100 people died. Damage ran to an estimated $16 billion. The disaster has been named the Camp Fire, in memory of its place of origin. The horror writers of Northern California rallied to raise money for the survivors.

Tales for the Camp Fire ranges from fairytale to science fiction, from psychological terror to magical realism, from splatterpunk to black humor, all rounded out by a messed-up post-apocalyptic cookbook. All profits from the sale of this anthology will be donated to Camp Fire relief and recovery efforts.

If you’d like to help, please buy a copy of the book from Amazon:

Also you can go to the publisher site, Tomes and Coffee, and learn more about the people made it happen, contributors, stories, and more!

See you next time! 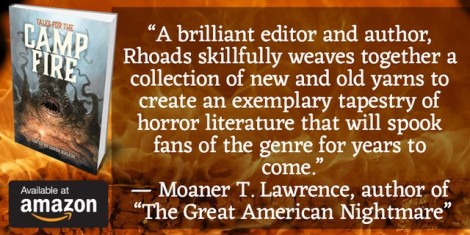 One response to “Loren Rhoads Talks About California Wildfires and the Charity Horror Anthology to Raise Money for Relief: Tales for the Campfire”