Welcome to the publicity page for Severed Empire: Wizard’s Rise (Pub date: Feb. 11, 2016, Mirror Matter Press) by Phillip Tomasso, created and managed by Erin Al-Mehairi and Tim Busbey of Addison’s Compass Public Relations and Hook of a Book Media and Publicity for Mirror Matter Press and the author. We are so glad you’ve stopped by, but be sure to pop in periodically for news and updates ongoing! The book tour publicity schedule will be updated BELOW each day.

We are always seeking more fantasy reviewers. If you’d like a review copy or interview with Phillip, please e-mail Erin Al-Mehairi, publicist, at hookofabook@hotmail.com.

Use the following hashtags in order to follow along: 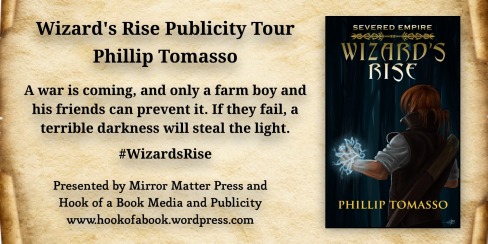 The Eyes of Madness

Guest article: From Zombies to Wizards 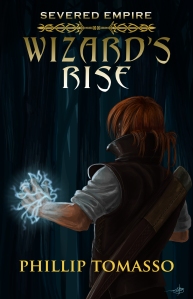 A war is coming. There is no way to prevent it. The only thing for certain is that there will be one loser. . .and one winner. WIZARD’S RISE (A Severed Empire Novel)

For over two hundred years the Rye Empire enforced drastic measures outlawing the use of magic. To avoid capture a handful of remaining Wizards escaped royal persecution and made it into hiding. Shortly after the decree the empire crumbled, but the laws remained in place. . .

The Mountain King’s ambitions of becoming the next Emperor will be realized. With forced help from an enslaved sorceress, he will stop at nothing until he achieves his dreams. The easiest path to victory can be obtained by retrieving buried talismans. With those enchanted items in his possession he can summon the Wizards, steal, and harness their power.

In an effort to save the Old Empire from a growing, sinister magic, seventeen-year-old farmboy Mykal and five friends begin a desperate journey. They must collect the talismans before the Mountain King. Their trek will force Mykal to face fears, and accept truths he’d never known existed. There isn’t much time. A war is coming.

Their chances of winning will depend on whether they succeed or not. If they fail, a terrible darkness will steal the light from the Grey Ashland Realm. . .forever.

Phillip Tomasso is the award-winning author of over 17 novels. He began his career writing mystery and suspense novels in 2000. Since, he has gone on to publish books in a wide variety of genres, including Horror, Young Adult, Science Fiction, and Fantasy. 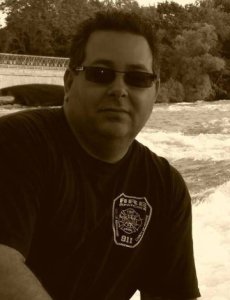 However, it being a Canadian publication—and at a time, when the U.S. dollar was worth more—his check was for just under $40. It was a great starting point, and has been selling regularly since then.

Although not a full-time writer, Tomasso works a full-time job as well. After 19 years at Kodak as an employment law paralegal, he’s spent the last six plus years a Fire/EMS Dispatcher for 9-1-1. He works the midnight shift, First Platoon, and has found the hours conducive to his creativity.

Tomasso lives in Rochester, NY with his 3 kids—who are not little any longer. Aside from reading and writing, Tomasso plays guitar, and is an self-admitted horrible singer. He is always at work on a next novel.

“This is different … confident, addictive storytelling, great characters, and an intriguing plot. You’ll read it fast but remember it for a long time. ” —Lee Child, best selling author of One Shot and the Jack Reacher series

“(Tomasso) takes the standard fare of the private investigator genre and adds twists and turns to make it anything but standard. Tomasso’s writing is crisp and clear … thoroughly enjoyable.” —Joseph Nassise, author of Internal Games and King of the Dead

“Robert Louis Stevenson’s Treasure Island is one of my all time favorite adventure yarns . . . Tomasso has managed to preserve Stevenson’s characters and pacing as the story enters this terrifying new adventure into the land of the living dead.  I hadn’t counted on loving this story as much as I did, but it surprised me and delighted me and terrified me every time I turned the page.  Great adventure, great thrills, and a terrifying glimpse into the jaws of death.  Highly recommended!” –Joe McKinney, Bram Stoker Award-winning author of Dog Days and Plague of the Undead

“Blood River is a thrilling blast of cryptozoological fun, a wild ride down tropical rivers in pursuit of a terrifying legend. It will leave you hungry for the next catch!” –David Sakmyster, author of The Pharaohs Objective and Jurassic Dead

To find out more information about Mirror Matter Press, visit their website.