Today, I have an interview with Donald Michael Platt, author of many wonderful historical novels, the most recent being Bodo the Apostate. You can read my review HERE if you missed it!

Hi Donald, welcome back to Oh, for the Hook of a Book. Always a pleasure to have you and Bodo (the cat, in this instance) on the blog. I have cat treats, I hope they fit to his appetite. And speaking of Bodo, you’re here today because you’ve released another new historical fiction novel, called Bodo the Apostate. How are you keeping up?

Donald: Thank you for the greeting, Erin. I am holding up well, polishing a “dark” novel and preparing to write a sequel to CLOSE TO THE SUN or continue the Rocamora saga.

Erin: It’s cold in Ohio, though less chilly in Florida. I’d normally come to warmer climates for interviews, but I’m leaving my slippers on and not leaving the house today. I’ll welcome you here, just be sure to wear your scarf. I’ll put on hot coffee today, or tea if you prefer, just let me know what you’d like. I’ll be having coffee with 2 sugars and cream. What would you like?

Donald: Thanks for the invitation, but I do all I can to avoid climes where snow is the norm. That is why I currently reside in Winter Haven, Florida.

Erin: OK, then we’ll have to discuss virtually, which means tea only for myself. lol! Let’s talk about your writing and books.

Donald: We shall do it as holograms in cyberspace.

Erin: Let’s get started! If Bodo ever wants to answer, I speak meow as well.He will be certain to interrupt, all 14 pounds of him.

Q: You’ve written several historical novels, and one dark fiction, across multiple time periods of history. I find that many historical writers tend to migrate within same themes. How do you decide what to write and keep all the timelines straight? What inspired you to write Bodo the Apostate set in the 9th century?

A:I write what I am inspired to write. Writer’s hell for me is to be stuck in the same place because a publisher or producer wants one to write the same stuff with the same characters after the writer has milked the period and no longer has the inspiration to continue. Here is why I wrote Bodo, the Apostate:

Little-known historical individuals who led interesting lives arouse my interest. Sparse documentation about them gives me more freedom to create character motivation and an entertaining story line. I encountered Bodo, the Apostate while research for Rocamora, Scholars still disagree regarding his motivations, so as a creative writer I decided to resolve that problem once and for all.

Q: Your novels are always so well-researched. What kind of research did you have to do for this particular novel? What was your favorite moment of research and your least favorite?

A:I always begin by looking for any book titled Daily Life During/In …. as a starting point. Because all documentations about Bodo’s apostasy were written by his adversaries in the Church, I had to research the times, the historical personages, and as always the flora, fauna, clothes, customs, and food in the 9th century Carolingian Empire.

The least favorite moments of research was sorting out the changing sides during the four rebellions against the emperor by his sons and allies without confusing the reader.

The best moment was researching for Carolingian humor. The site Questia offered all the information necessary to lighten Bodo, the Apostate when necessary. Germanic humor was coarse, but the literate few loved riddles and the writings of Martial, Catullus, and others of that era. One example: What is the best woman to wed? A rich widow who will die soon.

Q: Is your book more non-fiction written as historical fiction due to dialogue and assumptions or is your book loosely based on historical inspiration and predominately fiction?

A: The main events and characteristics of Emperor Louis and his wife Judith as well as minor historical personages who appear in the novl are well documented. Everything about Bodo himself, his actions and utterances are my creations. 67 lines of his post-apostate polemics have survived, which I incorporated in the proper place. As usual, I created fictional characters and events to fill gaps in the historical storyline.

Q: What types of history book lovers would like this book and why? What types of elements and themes does this particular novel explore?

A: Those who enjoy being immersed in other and unfamiliar times and places will enjoy Bodo, the Apostate. I like to play detective and solve mysteries about and motivations for my historical MCs. One theme is best expressed with a question: How can one live a satisfying life of choice against opposing authoritarian forces?

Q: Many of your books seem to deal with men in history who travel far and wide, take great risks, and are not well-known but deserve a place in history. Do you purposely strive to showcase their efforts with lasting legacies in book form, or do you just like a good story?

A: I try to do both. Researching is a pleasure in itself, and the greatest delight is to find that my educated guesses are correct.

Q: You always write with such great location details. Without traveling everywhere, or back in time, how do you create such wonderful visuals in your novels?

A:During my travels decades ago and my training as an historian I learned that contemporary visits to the areas I write about did not look the same as they would have in the 9th and 17th centuries.

As an example, my research discovered two physical phenomena that altered weather and geography. My educated guess is that great volcanic eruptions most likely from Iceland created chunks of ice, some fifteen feet long and thick to fall throughout the Carolingian Empre and affect climate change to the degree winters did not end until April. One year the Thames froze and snow fell on the Nile. Also, there was a great earthquake in 823 that damaged the royal palace in Aachen, caused rivers to alter courses, villages to disappear, and lakes to appear. That is why I prefer to rely on research rather than travel – except when I write a contemporary novel. We lived exactly where every scene in my horror novel,A Gathering of Vultures, takes place in Brazil and Florida.

Q: Speaking of good stories, you’ve written for the screen and TV, what would be your dream type of movie or show to work on now? Are you like me and miss the sweeping historical movie epics?

A: Yes, I fantasize about having each of my novels translated to film or a TV miniseries. A few Hollywood producers have told me my epic historicals would be too expensive to produce. We can’t go to Spain or Yugoslavia and have a real cast of thousands as when the dollar was favorable. When I was in Spain in 1956, I was shaved every day for 2.5 cents, my pension at the beach on Mallorca cost me $18/week, a gourmet meal in Barcelona about three dollars max. The mark was 25 cents to the dollar, and I had a London cabbie at my disposal. New Years Eve 1955-56 from 8PM to dawn for $5 including a generous tip.

Q: What is your favorite historical TV series at the moment? What is the best that has ever been shown?

A: Whatever appears on Masterpiece Theater.The best ever? That is difficult. I Claudius stands out, but so do The Keith Michel Henry VIII series, Downton Abbey, the originalUpstairs Downstairs, Poldark, Firth’s Pride and Prejudice, and the dramatized biographies. I yearn for a channel devoted solely to Masterpiece Theater and Mysteries. I do not subscribe to HBO and the other premiums so I know I am missing some HF series.

Q: I know that you are writing a sequel to Close to the Sun, your WWII novel. What else will you write? What other time periods or people interest you?

A:All time periods interest me. As I mentioned above I am polishing a “dark” novel set in 1946.

Q: If you could have coffee/tea with anyone right now, besides yours truly, who would you wish to join us? Why?

A: Oscar Wilde and Mark Twain for wit. Talleyrand, Elizabeth I and TR for political acumen.Lily Langtry and Eleanora Duse for both beauty and to entertain.

Q: Do you have some favorite authors or books you enjoy? Any good recommendations?

A:Too many to list from the Golden Age of HF, but I’ll include Sabatini, Costain, Shellabarger the American author Winston Churchill, Robert Graves, Mary Renault, Ben Ames Willliams, Viña Delmar, and Dorothy Dunnett. Historical research takes up too much time for me to read current HF, and I fear reading novels set in the same eras as mine because I may unintentionally plagiarize.

Q: What are you buying Bodo (the cat) for Christmas? (He’s listening, so be smart)

A:Bodo the Cat will receive a few cuts of rare filet mignon, plenty of attention, which he demands, and permission to cuddle.

Q: Where can people contact or stay abreast of your work?

A:On Amazon, friend me on facebook, and my web site www.donaldmichaelplatt.com

Erin: Oh, Donald, it’s always wonderful to talk to you and pet Bodo. I do believe that photo of you and he is the best photo I’ve ever seen. He’s quite regal. I do enjoy your sweeping historicals and will continue to read your books as long as you create them. It’s so nice to know you.

Donald: Thank you, Erin, always a pleasure to chat with you. Hope to see you in Denver at the HNS Conference in June 2015.

“… in the meantime, a credible report caused all ecclesiastics of the Catholic Church to lament and weep.” Prudentius of Troyes, Annales Bertiniani, anno 839

On Ascension Day May 22, 838, Bishop Bodo, chaplain, confessor, and favorite of both his kin, Emperor Louis the Pious, son of Charlemagne, and Empress Judith, caused the greatest scandal of the Carolingian Empire and the 9th century Roman Church.

Bodo, the novel, dramatizes the causes, motivations, and aftermath of Bodo’s astonishing cause célèbre that took place during an age of superstitions, a confused Roman Church, heterodoxies, lingering paganism, broken oaths, rebellions, and dissolution of the Carolingian Empire. 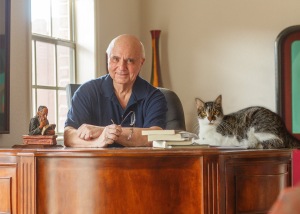 Here is Bodo, the cat, with Donald!

Author of four other novels, ROCAMORA, HOUSE OF ROCAMORA, A GATHERING OF VULTURES, and CLOSE TO THE SUN, Donald Michael Platt was born and raised in San Francisco. Donald graduated from Lowell High School and received his B.A. in History from the University of California at Berkeley. After two years in the Army, Donald attended graduate school at San Jose State where he won a batch of literary awards in the annual SENATOR PHELAN LITERARY CONTEST.

After living in Florianópolis, Brazil, setting of his horror novel A GATHERING OF VULTURES, pub. 2007 & 2011, he moved to Florida where he wrote as a with: VITAMIN ENRICHED, pub.1999, for Carl DeSantis, founder of Rexall Sundown Vitamins; and THE COUPLE’S DISEASE, Finding a Cure for Your Lost “Love” Life, pub. 2002, for Lawrence S. Hakim, MD, FACS, Head of Sexual Dysfunction Unit at the Cleveland Clinic.

Currently, Donald resides in Winter Haven, Florida where he is polishing a dark novel and preparing to write a sequel to CLOSE TO THE SUN.

Filed under Q and A with Authors