Archaeology and Imagination:
Building a scene of historical fiction set in the ancient world
by Judith Starkston, Author, Guest Article

Judith and her writing buddy, Socrates

I open my novel, Hand of Fire, with an emotionally charged moment: a young woman trying to save the life of her dying mother. That’s a universal experience that transcends any particular historical period, but for this opening scene to succeed, I also had to place the reader in Bronze Age Anatolia since my book is set within the Trojan War.

So I had two jobs. First, to bring my reader inside the young woman, Briseis, as she fights against her fears—an act of imagination, of living inside the reality of a another human being. That’s the core of what any fiction writer does, historical or not. Second, to include precise details which make the reader see, hear and smell the physical world of this far away place and time. These two processes have to work in balance, with the emotional content being what the reader is aware of and the world-building slipping in concretely but surreptitiously. In this post I’m going to look at the world-building side of this equation, particularly at how I use archaeology in that process.

At its best, creating an ancient world without distracting the reader from the action and emotions of the story is a magic trick, a sleight of hand that never calls attention to itself. No reader should stop and think, “My, what a great deal this writer knows about palaces of the Late Bronze Age.” Historical fiction writers don’t hit the goal of invisible magic all the time, but that’s where we should all aim.

For this opening scene what did I have to work with? How could I show my reader that we’re in a small sleeping chamber upstairs on a nobleman’s estate outside the city of Lyrnessos not far from Troy in about 1200 BCE? 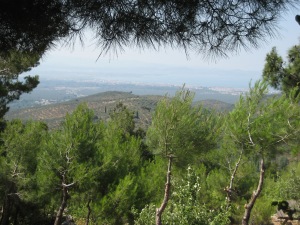 Mt Ida view looking out to the Aegean Sea

After a few paragraphs I used a violent storm blowing in to give the larger geography. Briseis imagines it “blowing in from some distant, dangerous place like Greece, blowing across the Aegean Sea and flinging itself against Mount Ida’s flanks.”

But how to “build” the room itself? From archaeology, what did I know about a room like that? I’d seen fragments and reconstructions of beds, and they are different enough from what you and I sleep on to make a quick point that, reader, you’re not in Kansas anymore. So in the first paragraph I said, “Briseis…adjusted the fleeces cushioning her mother’s shoulders from the leather straps pulled across the bed’s wooden frame. She got no response.” The bed description is tied closely to the actions and emotions, so I’m hoping the reader gets a picture in her head without stopping. 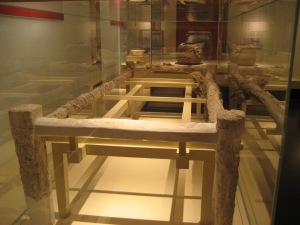 Briseis’s worried brother is twisting his tunic, a small ancient detail, although that didn’t take much archaeology since everyone knows about tunics—but that’s the point here; it’s an easy way to ground a reader.

To bring the larger context of the room into focus, I added “the flickering light came from clay oil lamps, causing the geometric patterns frescoed on the mud-brick walls to lunge and recoil.” Then I remembered the many ceramic braziers I’d seen in museums, so I brought one in. 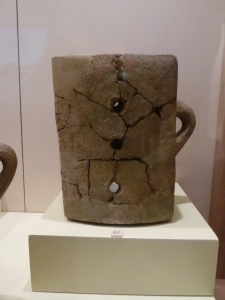 Central to my understanding of this world are the cuneiform tablets that have have been dug out of the ground in the thousands. So next up, Briseis prepares a sulfur and beeswax poultice on a portable brazier that was lit by a coal brought up from downstairs in a long handled bronze cup, and then she consults the clay tablets she and her mother use in their work as healers.

By now, several paragraphs in, I’m hoping my reader has left the modern world behind, but is mostly focused on the growing crisis. None of Briseis’s measures to save her mother has worked and this room is full of frightening, recoiling flickers—not unlike the flickering life Briseis is so determined to save.

Much later in Hand of Fire, Briseis participates in a daylong festival to their gods. Sometimes archaeology tempts a writer to include something so beautiful or so strikingly different that we have to work very hard at making sure we are not gratuitously including it, the dreaded “info dump.” There’s a silver libation cup in the Metropolitan Museum in New York that calls to me. It’s shaped like a kneeling stag with delicate branching horns, a checked collar and, around its middle where the lip of the cup is, a relief scene of priests making an offering to a god who stands in good Hittite fashion on the back of a stag. ( Stag Rhyton at the Metropolitan Museum )

I’ve never heard an explanation of why it so appealed to the Hittites to perch their gods on the backs of various animals as a sort of throne. It’s quite regal, showing the god’s power over nature, and I guess that’s the point. While full of wine, the nose of the stag would point down and gradually come upright again as the libation is poured completely out. I think this object perfectly expresses these particular people’s devotion to the gods, and it keeps the reader in a Bronze Age Hittite rite. There won’t be a mental blend with a Catholic chalice, for example, because it’s so different. The trick is to slide it into a scene that the action and emotions of the novel absolutely require and not to go too crazy with other details of sacrifice and offerings. It’s tempting—some of the translations from tablets of these rites go on for pages and pages prescribing different kinds of grain, beers, animals, types of priests etc. But sometimes you have to trust the one perfect detail to place your reader in this far away world, and I chose the stag rhyton cup.

This blending of small historical details into the emotional fabric of a novel is the heart of the historical writer’s job. I hope I have built a picture of daily life at the time of the Trojan War in a compelling way that allows the reader to enjoy the story without distraction. 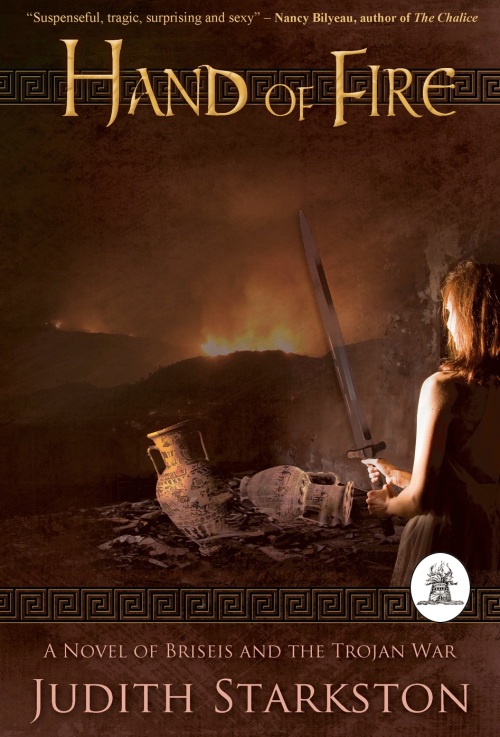 The Trojan War threatens Troy’s allies and the Greek supply raids spread. A young healing priestess, designated as future queen, must defend her city against both divine anger and invading Greeks. She finds strength in visions of a handsome warrior god. Will that be enough when the half-immortal Achilles attacks? Hand of Fire, a tale of resilience and hope, blends history and legend in the untold story of Achilles’s famous captive, Briseis.

She and her husband have two grown children and live in Arizona with their golden retriever Socrates. Hand of Fire is her debut novel.

Visit on Goodreads Hand of Fire

“But what is the difference between a good historical novel and a brilliant one?
I suggest you read Judith Starkston’s Hand of Fire and you’ll discover the answer.” Helen Hollick, Historical Novels Review Editor and author of Forever Queen

“In Hand of Fire, Starkston’s careful research brings ancient Greece and Troy to life with passion and grace. This haunting and insightful novel makes you ache for a mortal woman, Briseis, in love with a half-god, Achilles, as she fights to make her own destiny in a world of capricious gods and warriors. I devoured this page-turning escape from the modern world!” — Rebecca Cantrell, New York Times bestselling author of The World Beneath

“In her portrayal of Briseis, Judith Starkston has cast a bright light on one of the Iliad‘s most intriguing sub-plots. With her fast-paced story, three-dimensional characters, and fascinating cultural details, Starkston has given historical fiction fans a tale to remember.” –Priscilla Royal, author of Covenant with Hell