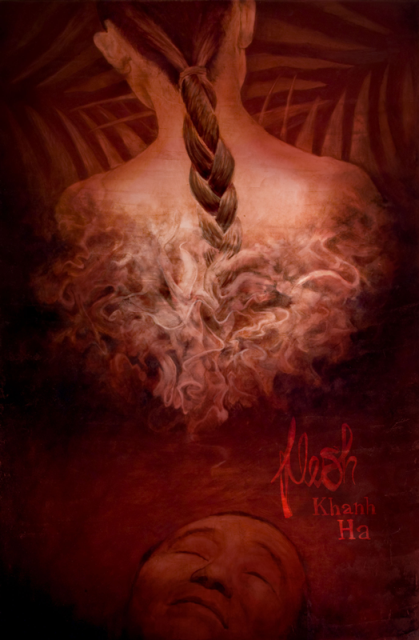 I’m going to extend my praise for Khanh Ha’s Flesh up front and without delay.  This book should earn literary distinction among the best literary fiction works for its multi-layered, lavish narrative prose! I hope my children will be reading this book in their college English classes one day. Whether or not, it will have a front and center spot on my shelf and it’ll be on my most recommended list.

It’s as good as award-winning literary fiction such as The Kite Runner by Khaled Hosseini, Atonement by Ian McEwan, and Memoirs of a Geisha by Arthur Golden. Such comparisons come because they all deal with social issues, the novel is propelled by characters and not strictly a plot, emotional ties are made by the reader, and they are poignant, original and haunting as far as thinking of humanity. Flesh is also written in first-person narrative, a feat only the best writers can accomplish.  I know that’s saying quite alot, but Mr. Ha deserves the credit. His writing is moving, caressing, and heart-wrenching.

Though most literary fiction is distinct due to being character driven, the best works also create a subplot moved by the characters and the description. Without it, it just becomes a droning on by a character about their every life. That is not the case with Mr. Ha’s novel. His writing style and detail is superb. Readers can feel the rain on their face, smell the sickness, visualize the banana leaves, taste the roasted snake, and imagine the horrors of life living in poverty. His description is flawless.

Mr. Ha’s narrator, Tai, completely compelled me into the book and wouldn’t let me go. He wanted me to hear this story and I obliged willingly, even when at times the subject matter tore out my heart. And back to the plot, that is what gave this book a foundation beyond the superb character development.

Mr. Ha’s Flesh creates a world full of twists and turns that is Tai’s journey. At first starting out with a goal of re-burying his father’s headless body and skull, as well as his little brother’s body, Tai is moved from favor to favor, in service to one after the other, owing favors, and even finding love. However, fate always has other plans and Tai moves flawlessly from one avenue to the next, never questioning. He is all about the journey and where life leads him. Mr. Ha seals up connections for us; always show us how one encounter can affect the next. Like the smoke of opium from the back alleys of Hanoi, this novel weaves a tale as fluid as that smoke, yet as exquisite as a red poppy.

I want to tell you if Tai completes his purpose, but I don’t want to spoil it for you.  I will tell you that the ending is both at times horrific, then very sad, but as well hopeful and inspiring. I don’t know how Mr. Ha can move me from one emotion to the next so fluidly, but he does.  I’m left with the thought of “life is about the journey, one step to the next” and “what you do now can come back to you or your descendants later.” We all feel connections throughout life, never knowing what impact they may have on us or someone we love later. The intricacies were phenomenal, you’ll know what I mean when you read it. The monkey, the pocket watch, the knife. Amazing.

This book had so many sub-sets to it, from poverty vs. rich (class issues), from Annamese (Vietnamese) vs. Chinese (racial issues), spirituality and religious issues, as well as deals with the opium dens and slave trade of late 19th Century Asia. I am certainly thankful, today, for the gift of my life in America.

You’ll connect to this book, love it, be bound by it, and want to read it straight through. You’ll get lost in this narration and enter a world like you’ve not read in a while. I highly recommend that you read Mr. Ha’s novel and expand your literary mind. It might be labeled as historical fiction of Vietnam, but it’s much, much more than just that. It’s a story of human triumph.

Thank you, Mr. Ha, for writing a book that truly touched my spirit.

I’ll be interviewing Mr. Ha on April 11! I hope you’ll stop back for what I am sure will be a great learning experience.

The setting is Tonkin (northern Vietnam) at the turn of the 20th century. A boy, Tai, witnesses the beheading of his father, a notorious bandit, and sets out to recover his head and then to find the man who betrayed his father to the authorities. On this quest, Tai’s entire world will shift. FLESH takes the reader into dark and delightful places in the human condition, places where allies are not always your friends, true love hurts, and your worst enemy may bring you the most comfort. In that emotionally harrowing world, Tai must learn to deal with new responsibilities in his life while at the same time acknowledging his bond, and his resemblance, to a man he barely knew–his father. Through this story of revenge is woven another story, one of love, but love purchased with the blood of murders Tai commits. A coming-of-age story, but also a love story, the sensuality of the author’s writing style belies the sometimes brutal world he depicts.

“Vietnam-born Ha’s beautifully described [. . .] first novel, set in his native country at the turn of the 20th century, opens with an infamous yet respected bandit being beheaded in front of his wife and their two young sons. This beginning casts a pall over the tale as Tài, the eldest son, embarks on a far-reaching journey to retrieve his father’s skull, find a suitable burial site, and seek revenge on the man who betrayed his father’s trust. Through a series of twists and turns [. . .] Tài trades two years’ service to a wealthy entrepreneur for land on which to bury the father’s remains. During that time, Tài loses his heart to Xiaoli, an indentured servant working in an opium den, and will do anything—including holding off on vengeance and killing a French soldier—to protect her. In this dark, violent, and poetic saga, with disjointed cinematic vignettes that make it often read like a screenplay, characters are not who they seem. While this makes for a thrilling finale, what lingers [. . .] is Ha’s descriptive prose.” – Publishers Weekly

Khanh Ha was born in Hue, the former capital of Vietnam. During his teen years, he began writing short stories, which won him several awards in the Vietnamese adolescent magazines. He studied Journalism at Ohio University and learned the craft of writing under Daniel Keyes (Flowers for Algernon) and Walter Tevis (The Man Who Fell to Earth). FLESH (Black Heron Press, June 2012) is his first novel (literary fiction).

See more of everything on the Flesh tour at Link: http://hfvirtualbooktours.com/fleshvirtualtour/
Twitter Hashtag: #FleshVirtualTour