It’s probably no big surprise to anyone that I am a Susanna Calkins fan. Her historical mystery novels set in 17th century England are some of my favorites in this genre, including her third Lucy Campion Mystery, The Masque of a Murderer, that I’ve recently pre-read prior to its April 14 hardback and e-book debut. 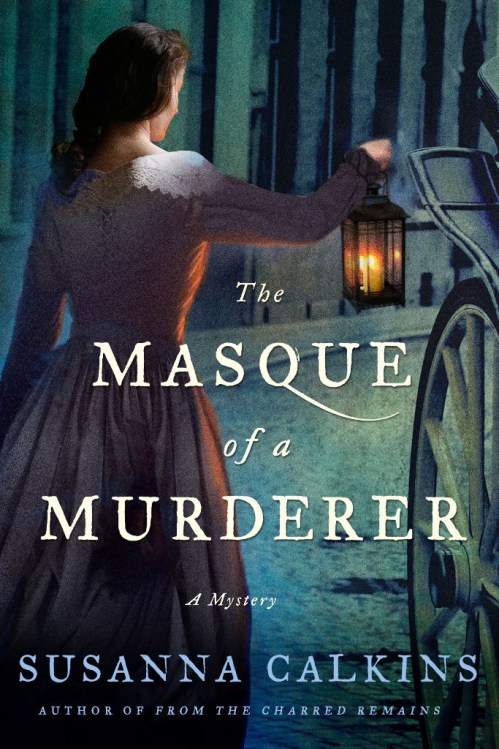 If you’ve not read any books by Susanna, you can take a quick read of my review of A Murder at Rosamund’s Gate HERE, an interview from 2013 HERE, and a review of the second novel, From the Charred Remains, HERE. That might give you more background of what I like about each novel, her writing style, and the characterization of main character Lucy, so that I don’t have to repeat myself too much.

Each mystery novel is written to be read standalone (that’s not just an opinion, it’s true, no matter what else you read), because each mystery is happened upon and solved within each book. The reason why it’s a series, and why you might want to read them all in order, is based on your own affinity for if you’d like to get to know more in-depth the background and set-up of the characters. I know that I’ve read all three in order and I can view Lucy’s progression as a woman with much more clarity and appreciation. However, even if you start with the third, or have missed the second, Calkins does a nice job of letting readers know, or reminding consistent readers, who each person is and how they align in Lucy’s life or within the plot. Removing myself and taking an overview look, I feel that you can follow Lucy’s progression, or just read Lucy for who she is in book three, and neither will make you feel as if anything is missing.

So all that disclaimer about the series aside, and delving into a review of The Masque of a Murderer, I feel that Calkins once again sets up 17th century London society in a way that is easily visualized to readers, whether it makes us cringe or not! The stench, freezing weather (and Thames), death, religious and political upheaval, crime, and ruins of the city and people’s homes does not seem very romantic. This isn’t the breezy countryside adorned with spring flowers. You’ll want to like dark mysteries that take on real history and societal truths if you delve into these.

Where the second book deals with the Great Fire and its economic and societal issues stemming from such a disaster, the third book leads in right after the fire and people’s displacement, about six months later, where bodies are carted away in mass and buried in group graves. Times are bleak. People seek out amusement in whatever gossip and stories they can find. This atmosphere is a great set-up to plot a mystery series, as not only is it very historically educational, but it is a perfect backdrop for a murder. With so much chaos and death, murderers could most likely get away with anything and bodies could be fairy well-hidden. Plus, when times are hard and people want change, all sorts of things can happen.

Lucy became a bookseller and a printer’s apprentice in the second book, and I think Susanna aligns the two trades seamlessly in books two and three. Though women would most likely not have such a job, Lucy is perfect at it and this allows her to be privvy to the news and gossip and roam the city in a much more easier way that any normal woman of the time. Her curiosity bug, and her need to help others, inadvertently materializes her into an amateur detective. At first she is leery of this, but by this third book, she seems to embrace it.

In The Masque of a Murderer, she is taking down the last words of a dying Quaker man, something that was common practice then. She attends the home of a Quaker gentleman, who only has hours to live after being run over by a cart and horse, alongside the distraught magistrate’s daughter who is also her former employer, Sarah.  Sarah herself had become a Quaker and feels its her duty to go and console the wife, while Lucy takes down the last words. During Lucy’s recording with him, the man reveals that someone has killed him due to a secret.

Lucy, now fairly more sure it’s her duty to keep others safe around her by solving the mystery, proceeds on the case through the cobbled and dark streets of London. Susanna once again creates an authentic world for us through her detailed descriptions, vivid and flowing sentences, dialogue, and use of words to peak our senses. Historically, she also lets us see through her writing lens to the ways of the Quakers. It was interesting to me, as though I’d read about Quakers in our early North America, I hadn’t really studied much about them from a London setting.

With plenty of further twists, turns, and revelations, Susanna’s The Masque of a Murderer shows how much her writing and plot weaving has improved further, leading us down a resounding path of gas street lamps, heavy dark cloaks, and people pretending to be who they are not. Lucy is entranced by intrigue and is a such a likable character, one in which I am truly connected. She almost seems so real to me, I forget she’s just imaginary. She’s courageous, intelligent, compassionate, and independent, which are all traits I admire in fellow women.

I’ve said it before, but in my opinion, Susanna is becoming one of the best historical mystery writers on the market. The Masque of a Murderer is a resounding winner. I can’t wait to read the next book in this series.

As far as comparisons, if you like Sam Thomas’ 17th century Midwife Mystery series or David Morrell’s Thomas De Quincey series in Victorian London, you’re sure to like Susanna Calkins’ Lucy Campion Mysteries.

The Masque of a Murderer, Synopsis~ 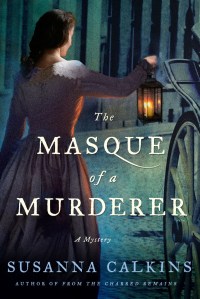 In Susanna Calkins’ next richly drawn mystery set in 17th century England, Lucy Campion, formerly a ladies’ maid in the local magistrate’s household, has now found gainful employment as a printer’s apprentice. On a freezing winter afternoon in 1667, she accompanies the magistrate’s daughter, Sarah, to the home of a severely injured Quaker man to record his dying words, a common practice of the time. The man, having been trampled by a horse and cart the night before, only has a few hours left to live. Lucy scribbles down the Quaker man’s last utterances, but she’s unprepared for what he reveals to her—that someone deliberately pushed him into the path of the horse, because of a secret he had recently uncovered.

Fearful that Sarah might be traveling in the company of a murderer, Lucy feels compelled to seek the truth, with the help of the magistrate’s son, Adam, and the local constable. But delving into the dead man’s background might prove more dangerous than any of them had imagined.

In The Masque of a Murderer, Susanna Calkins has once again combined finely wrought characters, a richly detailed historical atmosphere, and a tightly-plotted mystery into a compelling read. 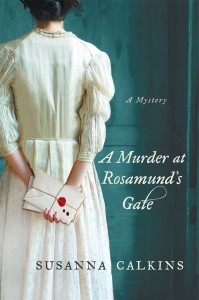 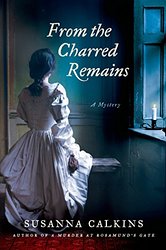 Book Three: The Masque of a Murderer (coming April 2015!)

“Calkins makes Lucy’s efforts to find the real killer entirely plausible, leading to a nail-biter climax with London in flames. This history-mystery delivers a strong heroine making her way through the social labyrinth of Restoration London.” -Booklist

“A historical mystery with originality and great attention to detail. Readers are transported to 17th century England, a time when social classes were just beginning to change. The characters are multi-dimensional–including the smart, adventurous Lucy Campion–and the mystery will keep readers turning the pages, and they’ll eagerly await the next book in the series.” RT Book Reviews (4 Stars)

“…an intricate tale of fraud and blackmail, leavened by a touch of romance. Calkins, who holds a doctorate in British history, puts her knowledge to sparkling use in this intriguing mystery, which combines a gripping plot with rich historical detail and one of the most admirable protagonists in the genre.” -The Richmond Times-Dispatch

“Calkins is able to seamlessly weave this romance into the story without making it the main plot line, and keeping the mystery the main focus of the story….The puzzles, anagrams, and many secrets combine to make intertwining plot twists that keep the pages turning. FROM THE CHARRED REMAINS is an exciting, secret filled, historical mystery that will keep readers guessing until the very end.” –Fresh Fiction (Reviewer’s Pick)

“A good yarn and a fascinating look at life in England in a time when things began to change…social classes, positions, servants’ rights…all because of plague and fire.” -Book Babe Blog

“For me, this book was more than a mystery. It was an eye-opening look at what London was like in the mid-1660s, including the plague and fire that ravaged London, class struggle, the plight of women, and the laws of the time. The author’s engaging writing style made it easy to slip back into the past and experience these things with Lucy.” -Book of Secrets

“A Murder at Rosamund’s Gate is Susanna Calkins’ absorbing debut novel. Just a warning that time WILL easily slip away as you become engrossed in this historical fiction mystery.” -1776 Books: A Philadelphian’s Literary Journey 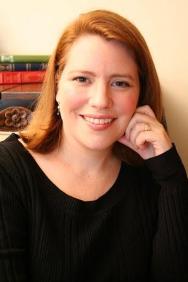 Born and raised in Philadelphia, Susanna Calkins lives in Highland Park, Illinois with her husband and two sons, where she is an educator at Northwestern University.

With a PhD in history, her historical mysteries feature Lucy Campion, a 17th century chambermaid-turned-printer’s apprentice. Her first novel, A Murder at Rosamund’s Gate, was a finalist for the Sue Feder Historical Mystery Award (Macavity).

The second in this series, From the Charred Remains, is currently a finalist for the Bruce Alexander Historical Mystery Award. Her third, The Masque of a Murderer, will be released in April 2015.