Tag Archives: Flowers in the Attic

Flowers in the Attic: A Gothic Must-Read Even if Movie Didn’t Deliver

Flowers in the Attic by V.C. Andrews is a book most of us thirty-somethings remember from our teenage years spent in our bedroom savoring delectable dramatic reads, right? Under our blankets, late into the night, with flashlight in hand we embraced the sordid stories she told and realized that life wasn’t always kind.

For me, Andrews was one of my first forays into Gothic horror. It was just wrapped up in a pretty enough package that it didn’t scare my mother. (If I remember right, mine had special flowers on the cover and was one of those where the flap opened up (it has a window) to the sub-page. Remember those?) Even now, when some of my women friends tell me that they just can’t stomach horror, I ask them if they read V.C. Andrews. I mean her books are shocking and scary right? As humans, we love intense drama (even if we say we don’t) and there is nothing much more dramatic or shocking than her story lines.

So why am I talking about the 1979 book Flowers in the Attic? Because V.C. Andrews’ life and books have always interested me. Further, Lifetime TV premiered their movie remake of Flowers in the Attic last night. I was highly anticipating watching this made-for-TV movie based on the cool promos,  excellent actor credits, vibrant images, and haunting music. Their marketing was SUPERB, and I know my marketing. Sucked me in, line and sinker… 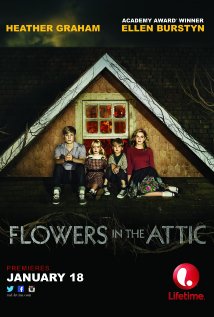 I can’t say I didn’t enjoy the whole “idea” of watching it, either. It could have been nostalgia, I suppose, or out of respect for the book and author that made me so certain I needed to check it out. It’s long been one of my favorite books, not due to its taboo subject matter, but because of Andrews’ ability to make us feel her character’s emotions.  I DID like that they brought the story back to life in a visual manner, especially since everyone says the last movie (circa 1987) based on the book was so awful. In fact, this Lifetime version was based on the last movie, not even the book as a whole.

I think it was great timing for them to bring to their large audience as so much of the Gothic realm is currently being brought into the mainstream (yes!!). People are anxious to define and discover the term Gothic and are curious as to the macabre tales of true or fictional people and events. Life is rough, so it helps watching something more abhorrent to remind ourselves it could be much worse. And with what’s in the news today, the occurrences really aren’t that unbelievable anymore. That’s my take anyway.

As far as the Lifetime movie itself, I was sorely disappointed. It didn’t do her book justice. If anything I hope that it makes people read the book, because people will remark that the book was WAY better and so people will jump on finding it. And it truly was better. I am not sure that the script writer even got the point of Andrews’ book. If you have some fabulous award-winning actors on board and their performance is dull and lifeless, then to me that makes me think that the script didn’t make them feel enough passion in order for them to act it out. The acting all around was just bland. The movie didn’t have enough time to really capture Andrews’ character points and development of the rags-to-riches, the motivation of money, and the force of family dynamics and demons.  After enjoying the beautiful, picturesque mansion from the outside and the crisp and colorful fashion and set design, I quickly became bored with the movie. How could that happen when the book was such a page turner?

It’s easy to understand why. It should have been a mini-series and not feel like a stage play. They had 90 minutes to really delve into the social aspects of the movie, the pain, the coming-of-age, the emotions and they barely were able to include any of it. We want dramatic television that makes of cry and weep and want to raise our children better. We want TV that makes us feel as books do and these movies never translate because they just can’t bring to us the emotional details that prose can. And that is what V.C. Andrews, who died in 1986 of breast cancer, would have wanted to give to us. She once said that her books HAD to be page turners, not bogged down with details, but with character driven emotion that would result in a reader not wanting to put the book down. Translated to TV, this should mean we are riveted with our eyes to the screen and using a Kleenex by the end.

The suffering of the children, the incest, the horrible ordeal that the children went through in the book just doesn’t even seem to have existed in this movie. The only point I was able to ascertain was one I already had in mind from reading the book. Although many schools consider this book out-of-bounds due to the content, I think that Andrews really tries to make this point:  the grandmother takes in her grandchildren and locks them in the attic so that they don’t do bad things. However, the actual act of locking them in there, where they fight for survival and depend on only each other for love, is what fuels the issue. Lines are crossed when you are under duress. I’m sure there are all sorts of life parallels to this plot. Andrews is most likely telling us that fundamentalist religion in the strictest of forms can lead to fight or flight mode as you struggle (internally and externally) to break free of those handcuffs, overstepping what is right and wrong instead of finding your own moral compass. These are all themes that make the book series phenomenal, and also forbidden in some cases, yet it’s hard to flush all that out in limited screen time.

Though I will watch the sequel, Petals in the Wind, that they say they are going to make, it will only be because I won’t be able to help myself.  However, I know the books will always be better. The series, and her writing formula for all her earlier book series, is to show the reader a progression from the turmoil of the female character and then go back and give us a prequel about what psychological issues started it all. So I’d say if you haven’t read V.C. Andrews Flowers in the Attic series, and are a fan of Gothic, speculative, or dramatic ridden books, I’d put them on your list. As for the new Lifetime movies, I’ll leave that up to you.

Flowers in the Attic, Wikipedia~

Flowers in the Attic is a 1979 novel by V.C. Andrews. It is the first book in the Dollanganger Series, and was followed by Petals on the Wind, If There Be Thorns, Seeds of Yesterday, and Garden of Shadows. The novel is written in the first person from the point of view of Cathy Dollanganger. It was adapted into a film of the same name in 1987. The book was extremely popular, selling over 40 million copies worldwide.

Original cover appears at right though there are many variations!

Flowers in the Attic, Book Synopsis~

At the top of the stairs there are four secrets hidden. Blond, beautiful, innocent, and struggling to stay alive…

They were a perfect family, golden and carefree—until a heartbreaking tragedy shattered their happiness. Now, for the sake of an inheritance that will ensure their future, the children must be hidden away out of sight, as if they never existed. Kept on the top floor of their grandmother’s vast mansion, their loving mother assures them it will be just for a little while. But as brutal days swell into agonizing months and years, Cathy, Chris, and twins Cory and Carrie realize their survival is at the mercy of their cruel and superstitious grandmother…and this cramped and helpless world may be the only one they ever know. 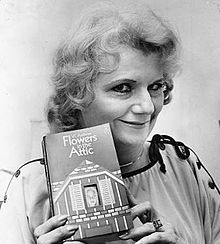 Cleo Virginia Andrews (June 6, 1923 – December 19, 1986), better known as V. C. Andrews or Virginia C. Andrews, was an American novelist. She was born in Portsmouth, Virginia. Andrews died of breast cancer at the age of 63.

Andrews’ novels combine Gothic horror and family saga, revolving around family secrets and forbidden love (frequently involving themes of consensual incest, most often between siblings), and they often include a rags-to-riches story. Her best-known novel is the infamous bestseller Flowers in the Attic (1979), a tale of four children locked in the attic of a wealthy Virginia family for over three years by their estranged religious grandmother.

Her novels were so successful that, after her death, her estate hired a ghost writer, Andrew Neiderman, to write more stories to be published under her name. In assessing a deficiency in her estate tax returns, the Internal Revenue Service argued (successfully) that Virginia Andrews’s name was a valuable commercial asset, the value of which should be included in her gross estate.[1]