Celebrating Women Series: Eva Stachniak on Catherine the Great as a Grandmother

Welcome to the seventh article in the “Celebrating Women” for Women’s History Month! It’s the first time I’ve coordinated an author guest article series to celebrate women in history or women making history! Thank you to Eva Stachniak for offering the seventh article in this series. If you’d like to continue on with the tour, which runs March 19-31, 2014, follow along each day on the main blog or head to this blog page, Women in History, which will be updated daily with the scheduled link.

Catherine the Great was not a happy mother. Her children were taken away from her as soon as they were born and she was not allowed to spend much time with them or to make any decisions about their upbringing. Her first-born, Paul, eight when Catherine became empress, and by then spoilt by his aunt, Elizabeth Petrovna, was always estranged from his mother. Catherine’s daughter, Anna, died in infancy, and her love child with Orlov, Alexei Bobrinsky, whom Catherine brought to the palace after the 19762 coup, did not live up to his mother’s expectations.

It was with her grandchildren that Catherine discovered the joys of parenthood. Her first grandson, Alexander, was always her most beloved, although she spent as much effort in bringing up his brother, Constantine. Accounts from the Russian court paint touching pictures: the Empress of Russia getting herself down on the floor to play with her grandsons, the empress designing her grandson’s play clothes, and—the most important—supervising their education.

How did she want her grandchildren educated? Children—Catherine believed—should be brought up according to the principles of reason. They should be able to ask questions freely and not to be ridiculed or punished when they made mistakes. Their natural curiosity should be fostered daily, their playtime should be both useful and fun. The education of princes could not neglect Russia’s political plans, either. Alexander had to be taught politics and economics. He had to be trained how to be a leader and an orator, a man able to talk with peoples from all walks of life.  Constantine, meant to rule the future Russian Eastern Empire from Constantinople, had to speak Greek, and thus had a Greek nanny.

Did it work? Not quite. Constantine did learn Greek but his own volatile nature made him unsuitable for leading Russia when an opportunity presented itself. With Alexandre, so carefully groomed to take over the throne of Russia, this liberal and progressive education also had an unforeseen effect. To Catherine’s bemusement, in 1795, the year when she was hoping Alexander would agree to be named her successor instead of his father, her beloved grandson replied that he wished to denounce his rights to the Russian throne altogether. He wished to withdraw to the country and cultivate his garden. Catherine, to her credit, listened to these youthful dreams with patience. She was convinced that her arguments and the reality of Alexander’s obligations will win over youthful idealism.

She was right, though not in the way she had planned it.

I was born and raised in Wrocław, Poland. English is my second language although, thanks to my wonderful and far-sighted mother, I began learning it in early childhood.

In Poland I was an academic, teaching in the English Department of the University of Wrocław. In the summer of 1981, on the eve of Solidarity crisis I received a scholarship to McGill University where I began working on my PhD dissertation, Positive Philosophy of Exile in Stefan Themerson’s Fiction (defended in 1988.)

In 1984-86 I worked for Radio Canada International, the Polish Section, in Montreal, writing and producing radio programs about Canada. In 1988 I joined the faculty of Sheridan College(Oakville, Ontario) where I taught English and humanities courses until 2007.

It is in Canada that I became a writer. My first short story, “Marble Heroes,” was published by the Antigonish Review in 1994, and my debut novel, Necessary Lies , won the Amazon.com/Books in CanadaFirst Novel Award in 2000.

The Winter Palace, based on the early life of Catherine the Great, has been a bestseller in Canada, Poland and Germany and was included in The Washington Post’s 2011 list of most notable fiction and Oprah Magazine’s “10 Titles to Pick Up Now” in 2102.

I live in Toronto. My second historical novel about Catherine the Great, Empress of the Night, will be published in March 25, 2014 in the United States.

To learn more about Eva,  her books, contact her for your book club meeting (she does Skype!!), then go to:  www.EvaStachniak.com.

Empress of the Night, Synopsis~ 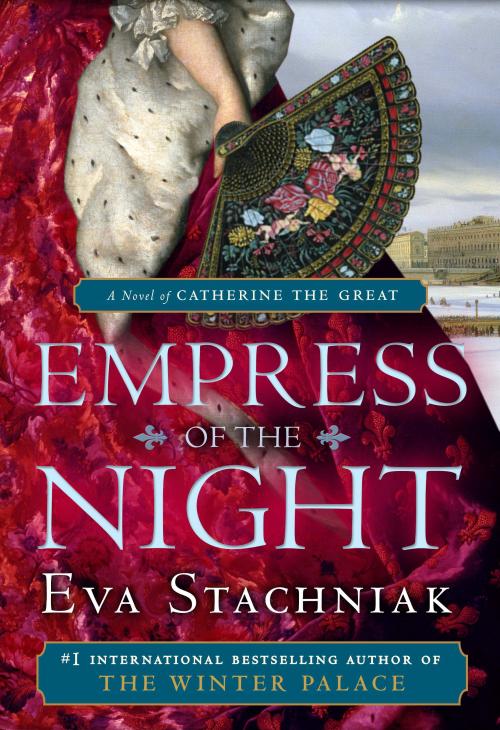 The Winter Palace brilliantly reimagined the rise of Catherine the Great through the watchful eyes of her clever servant, Varvara. Now, in Eva Stachniak’s enthralling new novel, Empress of the Night, Catherine takes center stage as she relives her astonishing ascension to the throne, her rule over an empire, and the sacrifices that made her the most feared and commanding woman of her time.

“We quarrel about power, not about love,” Catherine would write to the great love of her life, Grigory Potemkin, but her days were balanced on the razor’s edge of choosing her head over her heart. Power, she will learn, is about resolve, strategy, and direction; love must sometimes be secondary as she marshals all her strengths to steer her volatile country into a new century and beyond—to grow the Romanov Empire, to amass a vast fortune, and to control a scheming court in order to become one of history’s greatest rulers.

Gorgeously written with vivid detail and lyrical prose, Empress of the Night is an intensely intimate novel of a woman in charge of her fortunes, who must navigate the sorrows, triumphs, and hopes of both her soul and a nation.

Praise for Empress of the Night~

…ambitious…structurally complex and psychologically intense Empress of the Night aims for Hilary Mantel. Stachniak’s writing is distinct, however, especially in vivid description of sensory details: perfume, sweat and the click of heels on polished floorboards.

Empress of the Night … casts light on Catherine’s life with unflinching honesty and intimacy. This fun novel of lovers, intrigue and malicious and manipulative nobility keeps readers enthralled with every page…

Stachniak’s absorbing novel opens readers’ hearts to an extraordinary and misunderstood woman …wonderfully written, Stachniak’s story vibrates with passion, drama, and intrigue. This is a feast for fans.

…historical fiction fans will appreciate this personal account of a formidable and, indeed, infamous ruler.

And if you are interested in the first book……

Behind every great ruler lies a betrayal. Eva Stachniak’s novel sweeps readers into the passionate, intimate, and treacherous world of Catherine the Great, revealing Russia’s greatest monarch from her earliest days in court, where the most valuable currency was the secrets of nobility and the most dangerous weapon to wield was ambition.

Two young women, caught in the landscape of shifting allegiances, navigate the treacherous waters of palace intrigue. Barbara, the narrator, is a servant who will become one of Russia’s most cunning royal spies. Sophie is a naive German duchess who will become Catherine the Great. For readers of superb historical fiction, Eva Stachniak captures in glorious detail the opulence of royalty and the perilous loyalties of the Russian court.

The Winter Palace came out Fall of 2012 (Bantam US) and is available everywhere.

To read previous articles in this series and to follow-along, click here: