April is National Poetry Month and I do so love to highlight this type of writing I love to do, and also showcase other poets and work when I get the chance.

I hope to change more people’s minds about genre or dark poetry, in addition to poetry as a whole. I think if you’re one of those hesitant readers, give it a chance you’ll find it different these days than what you’re thinking of (being stuck back in high school classes). There is much to celebrate and appreciate!

For the rest of April I’ll be hosting original and re-print poetry, guest articles, interviews, and reviews from some poets I know and love, mostly in the dark poetry or horror poetry categories. If I have time, I hope to write some articles talking about poetry as well  such as diversity in poetry, feminist voice, dark poetry, favorite poets, but if I don’t get this latter done, I will happily feature them at other times during the year. Poetry never dies. 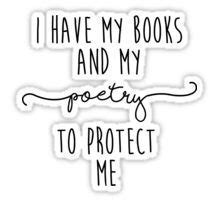 I’m proud to begin my celebration of poetry over the next two weeks with none other than veteran genre poet, Marge Simon! Fittingly enough, in her article she also encourages you to give poetry a try and lay the stereotypes to rest. And stay tuned from some poetry examples from her as well.

Perfect post to begin with….thank you so much, Marge!

Marge Simon is a writer, poet, and illustrator living in Ocala, Florida. She edits a column for the Horror Writer’s Association (HWA) Newsletter, “Blood & Spades: Poets of the Dark Side,” and serves on the HWA Board of Trustees. A Grand Master Poet of the Science Fiction Poetry Association, her stories appear in Daily Science Fiction, Polu Texni, Silver Blade, Bete Noire, and anthologies such as Chiral Mad 4 and Tales from the Lake 5.

“Poetry is nice, but I’d rather have a cookie.”

“Poetry is stupid. I wrote one for my girlfriend and she dumped me.”

I’ve actually had people comment like this to me over the years. In fact, most recently, at a Stoker convention, an author looked straight at me while I was signing a poetry collection and informed a bystander that he hated poetry. “Except for limericks,” he added. “Limericks are fine.” Sure, it was rude, but what can you say to that, other than “to each, their own”?

When I’m pressed by people as to what I write, I say “poetry,” but I’ll hasten to add, “It’s genre or speculative poetry, not what you are thinking of as poetry.” And then I change the subject, because I’m sure they don’t know what I’m talking about, and they don’t ask, and they really don’t care. I tell myself that I’m absolutely certain they are just being polite – and that is why I thought I would never write this article. But later, I got to thinking how there is poetry AND poetry. There is poetry for the general public appreciation, and there is also poetry that appeals to the literary community; there is poetry that those who appreciate both formal and speculative dark poetry.

Still what is so wrong with poetry, anyway? Most of it rhymes and is pleasurable to read if you are in the mood. We have these heavyweights of history to thank for poetry in our lives today – bet you have heard them quoted time over:

Not to mention Poe, C.A. Smith, and of course H.P. Lovecraft. You need to check them out – all of them. Take your time. You’ll find elements of darkness within a number of their works. As well, there are non-rhyming poems – poems with interior rhyme, or poems contrived to look like an object, and so on. How about poems that address the human condition? Speculative is my choice.

Here’s a variety of my stuff for examples.

A poem about familial relationships:

Old Dozer knows the way, I smile as he

veers off, going deeper into the foliage, where

a last burst of sunset falls on the brick hut,

How pleased I’d been that day to add that sign,

“KEEP OUT”, now buried in a pile of leaves.

I should complete my mission before dark,

for the bastard’s sake, as he’ll be waiting.

At first at odds, I determine to convey

the truth, not guise it all in falsehoods.

“There’s been enough bad blood between us.

I’ll set you free, if you promise to forgive.”

From inside I hear a croak of assent.

But Dozer growls, looks at me. Whines.

“Mother hated you, she believed my lies.

The mine we co-owned is worthless,

I sold the deed to our land years ago,

and I killed that whore you fancied.”

The latch is rusted, but the lock still holds.

My key won’t work, I smash it with my torch.

With trembling hands, I free the chain.

pushing it open a crack at a time …

Note: this poem actually concerns the relationship between a man and his dog.

A dark poem through a child’s eyes:

corpse of a lynx,

her foot in a bear trap,

in line at her dugs,

and all you say is,

them all, one by one

but that didn’t happen

and you’d said just as well,

But you were my brother,

so I didn’t argue,

and I didn’t cry.

Note: this speaks to those who look up to older siblings, realizing in the end that you need to draw your own conclusions about life and death

A poem through an alien lover’s eyes:

He Promised Me the Moon

this world would suffice,

but all I met were flimsy ghosts

playing with fractals and logistics,

as meaningless as gossip –until him.

He hired me as his model,

even promised me the moon

before his wife’s death.

I wasn’t planning on this,

to know such human feelings.

He begged me to move in, after.

But he sits now, staring at his paintings.

He won’t even let me touch him.

Her flowers shrivel in their pots,

for want of her special love.

She was from Orlando,

at four, fashion-wise and empty-

headed as the rest of their lot.

It makes me wince, knowing

I can assume a liquid form,

a creature foreign to this world,

from a planet of endless storms.

pick up his palette, have me pose.

I don’t care how painful or how long,

I only want him to undress me,

kiss me in familiar places –

I’ll find us a moon of our own,

Note: His wife was from Orlando, bringing this into a realm you can identify with – she could be from any city on earth, actually.

A poem through an ensorcelled puppet’s eyes:

When Again I Feel My Hands

hang idle on the strings.

& sleeps beside the wench

who takes my place.

Half human, half wood,

in a world deprived of joy,

I am the fool’s scepter,

a reprieve from tedium,

You cannot know how dear

the price of mirth.

With his dark eyes, he wooed me

& with his magic, he prevailed.

as he swept me in his arms

& then away to foreign lands.

Soon he’ll tire of her,

& cast a spell to change her form

as did he mine, to suit his needs.

and he will set me free–

or so he promised, long ago.

When again I feel my hands,

I’ll rip away these strings

& as he sleeps, I’ll pull them taut

around his bearded throat,

claim his magic for my own.

Note: this poor young woman is a victim of falsehoods, a timeless warning.

Lastly, a poem about your next door neighbor:

awake, I wander outside,

move close to their bathroom window;

I see the obsessive man

has tried to clean the filth

from his rectum with Drano, and

not to be outdone, his compulsive wife

has just botched a Clorox gargle

Open your mind to the many other realms of dark poetry. The perspectives are countless! Thanks for inviting me, Erin!

Marge Simon lives in Ocala, FL. She edits a column for the HWA Newsletter, “Blood & Spades: Poets of the Dark Side,” and serves on the HWA Board of Trustees.  She is the second woman to be acknowledged by the SF & F Poetry Association with a Grand Master Award.

She has won three Bram Stoker Awards, Rhysling Awards for Best Long and Best Short Poetry, the Elgin Award for Poetry Collection, the Dwarf Stars Award,
and Strange Horizons Readers’ Award. Marge’s poems and stories have appeared in Asimov’s SF, Silver Blade, Bete Noire, Grievous Angel, Daily Science Fiction, and in the anthologies, You, Human, Chiral Mad, and The Beauty of Death, to name a few. She attends the ICFA annually as a guest poet/writer, and is on the board of the Speculative Literary Foundation.

She has a daughter, Melle Tillison Broaderick, and two lovely granddaughters. She married a long time friend and colleague, Bruce Boston, in 2001. Besides being a fantastic conversationalist and the love of her life, he has taught her a great deal about writing top notch poetry and fiction, for which she is grateful.

In addition to her solo work, she has written collaborative poetry and fiction with Bruce Boston, Charlee Jacob, Mary Turzillo, Alessandro Manzetti and Bryan Dietrich.

You can view Marge’s fiction, poetry, and art, and contact her for freelance art assignments on her website.

Here is but one of her collections – 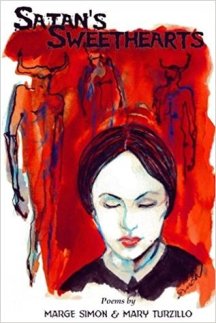 Satan’s Sweethearts is an evil collection of poetry. Meet the macabre history of villainesses as Ching-Shih, Dephine LaLaurie, and Lizzie Borden.

Look in my eyes. My bronze skin reflects the flames of the battles.

I feed on bullets and shrapnel.

I have trenches instead of veins and a bombardier’s whirring plays my favorite symphony inside my big head. This is my story, with some of my best camouflages and disguises, and you should expect your peace plans to fail. Because that’s what I do for living.

Look at my million golden teeth necklace. Ring any bells? Maybe you’re too young. I probably should have mentioned the fireworks over the Baghdad night sky, my new friend, or the live broadcast of two great skyscrapers disintegrating. You know what I’m talking about, right? So, you can call me by one of my many names: Great General, Lock-box of the Powerful, Red Rain, Lord of Steel or, more simply, WAR.

I appear as strife of many kinds, from Stalingrad to Scotland. Africa to Afghanistan, the civil war of Italy and the War Between the States, ghostly wars, drug wars, the battle of the sexes, World Wars I, II and visions of a holocaust yet to come. It’s all herein and more, with poems both collaborative and individual.

My pleasure having Marge on Hook of a Book! Stay tuned this week for posts featuring Bram Stoker Award winning poet Stephanie Wytovich and Bram Stoker nominated poet Sara Tantlinger, with more to come next week from some other awesome poets.

Have a great week!

Filed under Feature Articles, poetry, Q and A with Authors, Uncategorized, Usborne and Kane/Miller News