Welcome to the 17th article in the “Celebrating Women” Series for Women’s History Month! It’s the first time I’ve coordinated an author guest article series to celebrate women in history or women making history! Thank you to Tim Busbey for this article. The series ran March 19-31, 2014, and you can head to this blog page, Women in History, which will give you links to all articles in the series that you can read and share at any time. 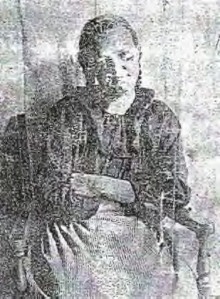 Ceely Rose, a photo taken during the time of her trial in 1896.

My article for the Celebrating Women series is a little different than most of them. The woman I am writing about is a person most people would not consider to be inspiring or “good.” However, her story is one that bears re-telling.

Today, I am going to share with you the story of Ceely Rose. Unless you happen to be from North Central Ohio, you probably have no idea who Ceely is. Most people in these parts have at least heard the name of the 19th century young lady who killed her parents over the love of a young man.

Nestled within the confines of what is now known as Malabar Farm State Park stands a rather non-descript, two-story white home. To the thousands of visitors who pass through the park each year, there is no sign of the tragic events that took place within those four walls 118 years ago.

Those tragic events were given birth by one young lady. Her name was Celia Rose, but to the residents of Pleasant Valley, she was known as Ceely. Ceely was born on March 13, 1873, to David and Rebecca Rose. By today’s standards, Ceely was severely learning disabled.

According to “Historic Haunted America” by Michael Norman and Beth Scott, “By the age of thirteen she could barely read and was always in classes with students much younger than herself. Many youngsters teased her for her poor grades and her pronounced stammer whenever she was called upon to recite.

With the cruelty that children often inflict on one another, they would scream, ‘Dumbbell Ceely! Ugly old Ceely!’” (As a weird sidenote/bit of trivia, Michael Norman was a professor of journalism at the University of Wisconsin-River Falls where I attended college my freshman year and I had him as a professor for two journalism classes.)

Although she was 23 at the time of the murders in 1896, it is said that she had a mental age closer to a young teenager. According to an 1896 newspaper report, “She talked with a stutter and performed on a level with children seven years younger than her. She might be described as half-child and half-woman.”

In 1896, Ceely was in love with a local boy named Guy Berry, who lived on a neighboring farm. Although Guy certainly didn’t share those feelings, Ceely told everyone that the two were engaged. Not wanting to hurt Ceely by telling her his true feelings, Guy reportedly lied and told her they could never be married because her family did not approve of him. Another version of the story says that Guy’s father was upset by Ceely’s daily visit to their home and told her parents to keep her away. 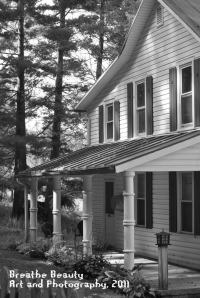 The Rose Home at Malabar Farm Photo by Erin Al-Mehairi

Heartbroken, Ceely decided to exact revenge on her family. At breakfast one morning in late June 1896, Ceely laced her family’s cottage cheese with arsenic. Her father died on June 30. Her brother, Walter, survived a few more days, dying on July 4.

Her mother must not have eaten much of the cottage cheese, because she recovered, eventually realizing what had happened. But when her mother began talking of moving away from Pleasant Valley, Ceely poisoned her mother again with a massive dose of arsenic. Her mother died July 19.

As the lone survivor of the Rose family, suspicion immediately fell on Ceely, but investigators had no evidence to prove her involvement. This was long before the days of “CSI.” Instead, it was a childhood friend of Ceely’s who talked with her and got her to confess to the killings.

Ceely was tried for all three deaths and found not guilty by reason of insanity. She was sent to an asylum in Toledo where she spent the next 19 years. In 1915, Ceely became one of the first patients at the new Lima State Hospital for the Criminally Insane. She died there a day after her 61st birthday in 1934 and her gravestone still stands in a cemetery at that site.

Ceely’s family and Guy Berry are buried in Pleasant Valley Cemetery, located just a short distance from the Rose and Berry homes.

You may be wondering why I chose Ceely as my woman to write about for this series. A few years ago, I got the idea to write a non-fiction book about the many sites in North Central Ohio that are reportedly haunted. My research uncovered a number of them, including Malabar Farm.

Many people believe that Ceely haunts the Rose and Berry homes, both of which still stand on the grounds of Malabar Farm State Park, as well as the Pleasant Valley Cemetery. Over the years, people have reported seeing a girl in a window of the former Rose home at times when no one was in the home, which is now owned by the Ohio State Parks. A play about her life is performed in a barn at Malabar Farm State Park, and many strange occurrences have been reported during rehearsals and performances.

Just last month, an episode of “Ghost Hunters” that was taped at Malabar Farm aired on the SyFy Channel. I don’t usually watch the show but I made sure to watch that episode OnDemand.

Whether or not you believe her ghost is still hanging around Pleasant Valley, the story of Ceely Rose is truly a tragic tale. The young lady was likely bullied her whole life for being different. Combine that with her developmental issues and it was a tragedy waiting to happen.

Besides the major women in history, it’s interesting to find the hidden stories of women of note right in your own backyard. Don’t be afraid to explore and investigate your local history. You never know what interesting tales you might find. 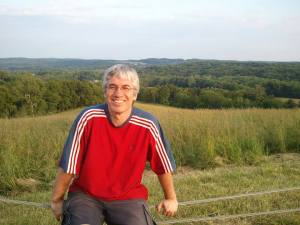 Tim Busbey has a Bachelor’s Degree in Journalism from Bowling Green State University. He has been a professional writer for nearly 20 years, spending the first 11 years of his career in the newspaper industry before transitioning into a role as a copywriter/marketing communications specialist. He has written for newspapers, a recruitment communication agency, a major small appliance manufacturer, and one of the top personal injury law firms in Ohio.

Currently, he is working as a full-time freelance writer/copywriter/editor for a variety of clients including an electronics distributor, an online news source, and a law firm, while assisting with other projects of Addison’s Compass Public Relations, a PR/Com/Marketing business he runs with Erin Al-Mehairi.

Tim is in the process of writing a horror novella, a non-fiction book about haunted locations in North Central Ohio, and a science fiction thriller novel that is the first of a series. He also offers editing services to a wealth of authors in all genres.

Tim has volunteered his time for a number of community organizations including The United Way of Ashland County and the Ashland County Cancer Association.

Tim lives in Ohio with his long-time girlfriend, Erin, and their three kids. When he’s not writing, Tim loves to read (sci-fi, fantasy, horror and thrillers mostly), watch TV, and coach his kids’ sports teams.