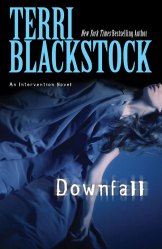 Who wants Emily dead?  How does an old Alfred Hitchcock movie figure in as a clue?

Newly released for March 2012 is Downfall, by Terri Blackstock, which is the final installment in her Intervention series . However, it also reads as a stand-alone novel. In fact, I had not read the first two books myself and was not the least bit lost while reading Downfall. In this series, Blackstock takes on the tough topic of drug addiction, one that hits really close in her own family life.

Downfall character Emily Covington has turned her life around after being rehabilitated for a drug addiction. However, her family still watches her every move and misjudges her actions as they try to make sure she isn’t slipping back into using drugs again. She is enrolled in college and staying sober. When a car bomb almost explodes her car one morning, everyone immediately wonders if it is drug related. Her mother’s police officer boyfriend promises he will monitor the case, but as he is distracted by another murder, Emily decides to take on some of the case herself, which puts her life in danger as the cases may be related. She wants to know who wants to kill her and if someone else is also in danger!

Blackstock’s opening pace is right on target, giving separate small glimpses between a mystery criminal called The Avenger, a seemingly unrelated murder (until she finds out it is someone she knows!), and Emily’s life while it is again at the point of unraveling. As a reader, I wanted to know the tie-in between all the scenarios and that kept me reading to the end.

Though Downfall is a novel of suspense, I think once you get halfway through the book, the suspense becomes a lighter focus and the book concentrates more on Emily’s redemption within herself, her life, and her family. It is very touching and though I don’t have experience with substance abuse, I think anyone who has had it grip their lives will relate to this book.

However, in general, it is also a poignant read and gives other readers insight into addiction, recovery, redemption, and God’s grace.  Putting the addiction theme to the side for the moment, it is a page turning mystery for suspense readers looking for a novel for a single evening or weekend read. Both reasons will keep you reading it through to the finish.

To read more about Downfall, as well as the first two novels of the Intervention series, click on this link to Terri’s website:  http://www.terriblackstock.com/books/adult-fiction-books/the-intervention-series/.

You can also find more about Terri and her work at www.terriblackstock.com. 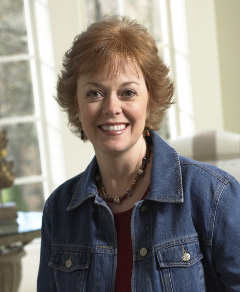 Terri Blackstock is a New York Times best-seller, with over six million copies sold worldwide. She has had over twenty-five years of success as a novelist. Terri spent the first twelve years of her life traveling in an Air Force family. She lived in nine states and attended the first four years of school in The Netherlands. Because she was a perpetual “new kid,” her imagination became her closest friend. That, she believes, was the biggest factor in her becoming a novelist. She sold her first novel at the age of twenty-five, and has had a successful career ever since.

Her most recent book, Vicious Cycle, debuted on the New York Times best-seller list, as did Intervention, the first book in the Intervention Series. Intervention was also a 2010 Carol Award Winner. The series deals with the subject of drug abuse and its impact on families. Other reader favorites include her books Predator and Double Minds, as well as the Restoration Series, the Newpointe 911 Series, the Cape Refuge Series, and the SunCoast Chronicles series. In September, Shadow in Serenity will release. Her next Intervention Novel, Downfall, will release in February 2012.

In 1994 Terri was writing romance novels under two pseudonyms for publishers such as HarperCollins, Harlequin, Dell and Silhouette, when a spiritual awakening prompted her to switch gears. At the time, she was reading more suspense than romance, and felt drawn to write thrillers about ordinary people in grave danger. Her newly awakened faith wove its way into the tapestry of her suspense novels, offering hope instead of despair. Her goal is to entertain with page-turning plots, while challenging her readers to think and grow. She hopes to remind them that they’re not alone, and that their trials have a purpose.

Terri has appeared on national television programs such as “The 700 Club” and “Home Life,” and has been a guest on numerous radio programs across the country. The story of her personal journey appears in books such as Touched By the Savior by Mike Yorkey, True Stories of Answered Prayer by Mike Nappa, Faces of Faith by John Hanna, and I Saw Him In Your Eyes by Ace Collins.