Today I am very pleased to introduce a wonderful guy and author! James Matlack Raney writes fantasy adventure in his books Jim Morgan and the Prince of Thieves and Jim Morgan and the Pirates of the Black Skull! Below is a guest article about why he likes and writes fantasy books, in which he offers some tips for writers who are writing or who want to write fantasy for themselves! I really enjoyed the article; I hope you do too.

More than any other kind of book, I love reading and writing fantasy adventures the most, losing myself in their mysteries, discovering their hidden treasures, and exploring the self-reflective borders between their worlds and mine. I grew up on Lewis and Tolkien, Stevenson and Defoe, and later, King and Rowling, walking the paths of Hogwarts and Gilead, sailing the oceans of Narnia and Middle-Earth in my mind. If you’re reading this post, odds are you have a favorite fantasy world as well, maybe from the old classics, or perhaps among the new ones, such as Panem or the Glade. But how did those worlds get there? Where did they come from? Perhaps you’re wondering how you might go about creating your own. I don’t have the answers to all those questions, nor perhaps does anyone else, but I can at least give you three hints from my own writer’s journey.

The first hint is to open yourself to your muse. C.S. Lewis famously said the entire world of Narnia was born from a single image that popped into his mind, a picture of a faun, walking through the snow, carrying a pile of Christmas packages in his arms. While I am certainly not C.S. Lewis, a single flash in my imagination gave birth to Jim Morgan’s adventures in a world of pirates and magic. I saw a young man, a black crow on his shoulder, standing on the pirate ship’s prow, the sails caught on a morning breeze. I can’t explain how the amazing human imagination works, but being relaxed, taking long walks, listening to music, all those things help daydreams take hold and grow. Close your eyes. What do you see? When you find a picture that captures you, grab hold of it and don’t let go, for somewhere in that image is a story to be told!

The second hint is to learn the language of storytelling. Once an author has a picture in mind, one that has begun to take root and grow, how does she successfully transfer it to the page? Even though most well told stories feel unique and original, the majority of them follow a measured and well-worn road, one travelled by many storytellers before, a specific set of beats and notes, a series of guideposts that aid both writer and reader in finding their way from beginning to end. If you look closely at your favorite books, you may see the pattern take shape. But if you’d like to learn from an expert, try Joseph Campbell’s books or Christopher Voegler, who has helped make Campbell a bit more digestible. Don’t be afraid to learn form and formula! I promise it won’t rob you of your creativity. On the contrary, it will help you more easily shape and mold on paper the world you wish to build in your mind.

The final hint I’ll offer is to never forget our real world as you create your fantasy universe. To me, one of the most moving moments in all the Lord of the Rings is the death and confession of Boromir, very much the same way that one of the most challenging moments in the Hunger Games is the death of Rue. There is nothing fantastical, magic, or unrealistic about either of those scenes, scenes of loss, of friendship and loyalty broken, of pain. But they are the moments that connect us most deeply with the characters and plots of the stories. The heart of every perfect fantasy is found in earthbound emotions and human experience.

So there you have it! Three hints to the creation of fantasy adventures; I hope they help you on your own writer’s journey, or at the very least, aid in your enjoyment of the great fantasy literature so many amazing authors continue to produce. Perhaps, if I’m lucky, a few of you might add Jim Morgan to your list, and join him, the Ratts, Lacey, and Cornelius on an uncanny adventures full of pirates, sorcerers, and sea monsters. 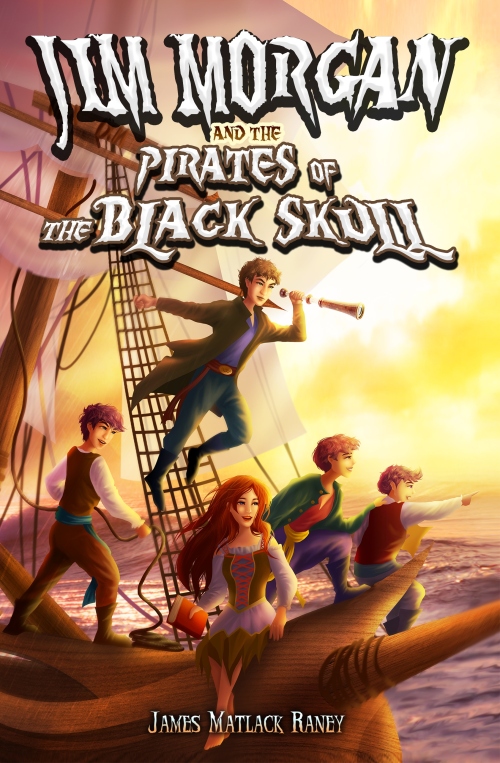 Hot on the heels of Jim Morgan and the King of Thieves, which was praised by About.com’s Fatherhood Guide, YAReads.com, Publishers Weekly, Kirkus Reviews and influential book bloggers across the globe as “a rip-roaring good tale for children of all ages,” Jim Morgan and the Pirates of the Black Skull sees old friends, new foes and magic forces tempt and test its protagonist, who is, one year following King of Thieves conclusion, at long last ready to return home to Morgan Manor.

Faced with terrors beyond his imagination – pirate battles, hidden islands, sorcerers and sea monsters – in Jim Morgan and the Pirates of the Black Skull, the formerly spoiled-rotten Jim Morgan must learn to trust new allies, discover the power and magic of true friendship – and, just possibly uncover a hero hidden within him.

Ripe with fantastical challenges and miraculous victories that will resonate with any young reader who finds themselves in the thick of navigating young adulthood’s complexities, Jim Morgan and the King of Thieves is a good old-fashioned adventure story fit for a 21st century attention span.

“I wrote Jim Morgan to grab the attention of boy readers who have few options on bookshelves in today’s marketplace,” says Raney of the series. “Contrary to popular belief, I feel that boys actually enjoy reading, provided it’s rich with excitement, danger, and emotional themes they crave.”

James Matlack Raney grew up all over the world, including Europe, Latin America and Africa. These days, he calls Southern California home, and spends his time writing adventures…and occasionally living a few of his own.

Jim Morgan and the Pirates of the Black Skull is available now via Amazon and in select brick-and-mortar retailers.

STAY TUNED FOR A REVIEW AND AN INTERVIEW COMING UP OVER THE NEXT FEW WEEKS!