Cover Reveal and News: The Cipher by Kathe Koja in Print from @MeerkatPress #TheCipher #WomeninHorror

Cover Reveal and Info on The Cipher by Kathe Koja –

Many longtime horror fans, especially those who’ve always loved the mass market horror of the 80s and early 90s, probably know what The Cipher by Kathe Koja is all about or they’ve at least heard of it. The first Dell/Abyss copies from the early 90s are highly sought after and can be expensive online (and a cause for celebration if one is found thrift shopping). Kathe is one of the best-known old-school women in horror in my opinion of that time period, if not of entirety of writers, and she’s still to be admired to this day. Especially in the Midwest, rust belt, great lakes areas, as she’s from Michigan, I know Kathe is held in high regard as an author, director, producer, but I think it’s safe to say it extends farther as her work has been translated multiple times.

And she’s cool as all get out. Few handfuls of women rose to the ranks of being allowed to publish horror back then (yes, back then haha), let alone continued their creative careers. If you never heard of her, I’m sorry and please change that! If anything, if not from me, some of you have heard of her now that you’re listening, reading, and watching Josh Malerman rise in popularity. He will praise Kathe Koja any day.

So now that you’re nodding your head as you already know and like Kathe or her work, or you’ve gathered a touch of why this print release is important to the genre, I’d like to help present the cover reveal from Meerkat Press for the anticipated print release of The Cipher! What it’s all about, I’ll give a snippet of below, but it’s for serious horror fans, and all of them should read and decide for themselves on this book. Please know it’s in the body horror sub-genre (which is a growing genre only getting some traction now – imagine Kathe writing it decades ago!). It may make some of you queasy, some of you will love that, and some of you will be unsettled. It’s not for all my readers who follow me. But if you do read it, you’ll not be able to turn away from Kathe’s beautiful writing style. It will be available for pre-order at the link below and publish later in September 2020.

Take a look at this great cover and then read on below it for a little more information on the book and Kathe. Thanks for learning about books with me. Comments are always welcome.

Haven’t heard of The Cipher?

The Cipher in print was long sought out and searched for after for years and only available in e-book starting in 2012, after it first made its appearance from Dell’s new Abyss imprint. Now, it finally becomes available again from Meerkat Press!

THE CIPHER by KATHE KOJA

Kathe Koja’s classic novel of fear, obsession, creation, and destruction, The Cipher, which reopens the door on the Funhole with this brand new and long-awaited print edition. It is the winner of the Bram Stoker Award, Locus Award, and a finalist for the Philip K. Dick Award.

Prior Praise for The Cipher –

“An ethereal rollercoaster ride from start to finish.” – The Detroit Free Press

“This powerful first novel is as thought-provoking as it is horrifying.” – Publishers Weekly

“Unforgettable … [THE CIPHER] takes you into the lives of the dark dreamers that crawl on the underbelly of art and culture. Seldom has language been so visceral and so right.” – Locus

“[THE CIPHER] is a book that makes you sit up, pay attention, and jettison your moldy preconceptions about the genre … Utterly original … [An} imaginative debut.” – Fangoria

“Winner of both a Bram Stoker Award and a Locus Award in 1991, Koja’s debut has yet to lose one iota of impact. It’s a marvel of bleak economy: Nicholas, going nowhere in his video-store-clerk job, discovers a foot-wide black vortex in an old storage room of his apartment building. His caustic sometime-lover, Nakota, christens it “the Funhole” and begins inserting experimental items. Seemingly influenced equally by Clive Barker, David Cronenberg, and a particularly distasteful nightmare, this entry into the body-horror canon carries with it the kind of fatalism horror readers prize—it’s going to end badly, for sure, but just how badly? Currently available in an e-book version from multiple sources, this is well worth rediscovering, if you’ve got the guts.” – Daniel Kraus, Booklist (and we all know who Daniel Kraus is now!)

The portion I took out explained a bit was they insert and what happens. But I’ll let Meerkat Press supply a synopsis when ready or at pre-order, which you may find a link to above! 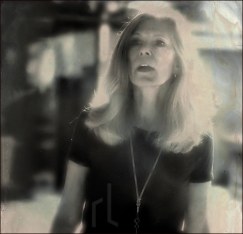 Kathe Koja writes novels and short fiction, and creates and produces immersive fiction performances, both solo and with a rotating ensemble of artists.

Her work crosses and combines genres, and her books have won awards, been multiply translated, and optioned for film and performance.

She is based in Detroit and thinks globally. She can be found at kathekoja.com.