Today, for the #HookonWiHM project, author Theresa Braun has interviewed the Canadian author J.H. Moncrieff! I’m super excited to have both of these women on the site today in promotion of Women in Horror Month. J.H. Moncrieff writes paranormal suspense, thrillers, and horror. I enjoy following her travels especially to all the haunted places. Happily, I’ve recently met Theresa this year as we shared the TOC in the anthology Hardened Hearts together, which published by Unnerving in December 2017.

I’m taking interviews by men and women with women in horror, as well as guest articles, throughout the month of February. You can see information on this at the bottom of the post. For now, take it away Theresa. Thanks for a great interview with J.H. Moncrieff!

Do you feel the feminist conversation surrounding Margaret Atwood is relevant to the issues relating to female writers and female characters? Does Atwood carry any weight for you personally, since you both happen to be Canadian?

I have read Atwood’s defence of her stance on the firing of the UBC professor, which fanned the flames and turned even more women against her (which, as a publicist, I could have told her it would. Sometimes the best thing to say is nothing), and she raises some valid points. Movements like #MeToo do have the potential to become public witch hunts. And they are the result of a legal system failure: if women’s reports of sexual assault and harassment had been taken seriously, there would be no need for scores of women to go public about the issue on social media (or, at least, less need). However, as women, we need to be extremely careful not to re-victimize the survivors of sexual harassment and assault.

Almost every woman on the planet has experienced one or the other or both, but most of us don’t report it because we still fear the repercussions or assume we won’t be believed or taken seriously. We’re still living in an age where a man who was seen raping a woman spent only three months in jail. Where a police officer said to me that one of the strongest indications a woman was lying about sexual assault was she’d reported it, as most “true victims” don’t. And this was coming from a man most would consider sensitive and enlightened. Where people still get frustrated about the women pointing fingers at their favorite celebrities, but never once get angry at the men for the sexual misconduct and abuse of power.

Atwood argues the pendulum is at risk of swinging too far in the other direction. But perhaps it needs to. Just as many find the “zero tolerance” policy of dealing with domestic violence unfair, and it’s certainly flawed, it’s like that for a reason. Only when we’ve seen genuine progress on these issues, when women are no longer viewed as either sexual objects or prey, can people like Atwood safely call for balance. The problem is that our society has been far too unbalanced for far too long. Publicly critiquing a movement that amplifies survivor’s voices and raises awareness of just how prevalent sexual abuse and harassment are, is certainly going to be seen as anti-feminist, to put it lightly. To respond with guns blazing and a “Screw you, I’ve been called worse!” editorial hasn’t helped matters. The fact we’re both Canadian doesn’t bond us or give her opinion more weight to me, but I am more likely to see her editorials, as Canadian media have always given her a platform and will continue to do so.

Do you consciously include gender issues in your fiction? If so, what are some that you have explored? And are there any that you plan to explore in future storylines?

Monsters in Our Wake features a character who is the only female working on a drillship, and it explores some of the sexism and ostracism she suffered as a result, but on the flip side, the sea creatures in that novel live in a matriarchal society where the females are larger, more powerful, and make the majority of the decisions. Some readers have had a huge problem with this. A man accused me of being “anti-male” because of this novel, and some female readers hated Flora because she came across as weak or timid, while they’d always thrived in male-dominated environments. In City of Ghosts, I explored how women can be their own harshest critics and what can happen when they turn against each other. Again, some women really didn’t like that, and they disparaged how “girl-on-girl crime” has been overdone in fiction. 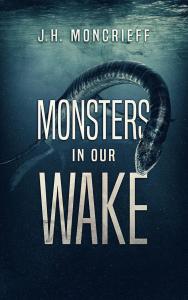 But the truth is, I don’t set out to write with a feminist agenda, or any agenda. I write people (and creatures), and people are flawed. Sometimes they’re misunderstood or obnoxious or misguided, and sometimes they’re just plain ugly. While I’ve never been ostracized like Flora was, I have been one of the only women in extremely male-dominated professions and sports, so it was easy for me to feel for the struggles someone less assertive might have. And I’ve experienced a ton of “girl-on-girl crime” in my lifetime–in elementary school, in high school, and in the workplace, both from colleagues and from supervisors. Women are capable of being awful to other women, and refusing to be honest about that would do everyone a disservice.

You have written a lot about characters facing supernatural situations. And you have based several of these novels on real places that you have visited. Which of these has scared you the most? Why?

The scariest place I’ve ever visited was Poveglia, an island off the coast of Venice that is considered to be the world’s most haunted. I don’t spook easily, but I was terrified the entire time I was there. Not only was I completely alone on the island, I was there during a violent thunderstorm. Poveglia has a truly chilling history, which I explored in The Girl Who Talks to Ghosts. Although nothing overt happened to me–I didn’t see a ghost–there were definitely a lot of strange, unexplained sounds and a very strong sensation that something was wrong in that place. It’s very creepy.

What future project are you most excited about? Tell us about that.

While I have a lot to be excited about this year–the release of the first book in my new Egyptian series, which was previewed in Temple of Ghosts; the fourth book in my GhostWriters series; a Christmas GhostWriters novella; and a few other projects–I’m probably most anticipating the release of Dead of Winter, which Severed Press will publish this spring. It’s about a famous podcaster who ventures into Russia’s Ural Mountains to investigate what happened on the Dyatlov Pass back in the ’50s. Since The Dyatlov Pass Incident is one of the scariest unsolved mysteries of all time, it was a fun topic to explore and I was really happy with how the book turned out. Best-selling author Hunter Shea gave it a great blurb: “Dead of Winter will freeze your blood! A mystery dripping with terror, the sense of isolation and impending doom kept my heart racing right until the very last line. An instant classic.”

My readers are amazing. I’m still so grateful I get to do this that every positive review makes me teary. One reader emailed me to say Temple of Ghosts helped her get through a difficult time after her daughter’s house caught fire. Another left a review for City of Ghosts that ended with, “City of Ghosts stirs the reader’s childhood fears and mixes them with compassion for all of China’s unwanted little girls.” That really got to me, because I wrote that book for those little girls, but I didn’t think anyone had understood that. When a reader gets you, it’s the best feeling in the world. I bawled. During a recent visit to a book club, the members surprised me with a gigantic gift basket full of goodies like gourmet tea, bubble bath, candles, a hardcover book, a bookmark, pens, etc. It went on and on. It was almost bottomless. I was extremely touched. Book clubs are the best, with or without the gifts.

Check out books from Moncrieff such as:

The Girl Who Talks to Ghosts and Temple of Ghosts

Thanks again to Theresa Braun for conducing the interview! 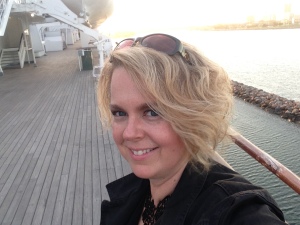 Theresa Braun was born in St. Paul, Minnesota and has carried some of that hardiness with her to South Florida where she currently resides. Traveling, ghost hunting, and all things dark are her passions. Her work appears in The Horror Zine, Sirens Call, Schlock! Webzine, Hardened Hearts, and Strange Behaviors, among others.

Watch for more to come in the #HookonWiHM series….

February is Women in Horror Month! Though I agree women should be celebrated on the same level as men every day of the year, I like to partake in Women in Horror projects as a catalyst for spreading the good news and works of women in the genre in hopes that it will carry on throughout the year. It’s time to celebrate and show off what we got! For those of you reading, men AND women both, make an effort to read and watch more horror produced by women this year.

For the #HookonWiHM, or Women in Horror Month at Hook of a Book, we’ll be hosting interviews conducted by men and women with other women in horror. Watch for those spread throughout the month, and if you want in, contact me! Find more info HERE.

Filed under HookonWiHM, Q and A with Authors