Happy Easter everyone!! I hope whether you are celebrating for religious reasons, or just having a fun day with the kids, that your holiday is special for you! We observe Easter in my household, and it’s also my kid’s spring break from elementary and middle schools, so we’ve been having a very busy last few days.

I’m not really blogging or working over this holiday weekend to devote time to my family, but I did sign-up for a Sourcebooks Jabberwocky blog tour for the sequel to Rose, called Rose and the Lost Princess. It’s a middle reader book/series that my girls–Addie, age 6 and Emma, age 10–both adore so the girls and I have stopped by the blog to let you know to check it out.

Such a cool cover!

If you filled your children’s baskets or gave gifts galore already, there is still always room to buy books right? Besides this one is just hot off the publishing presses!  This series is definitely one that girls in the middle age range can appreciate. First published in the UK by author Holly Webb, it’s now being published here in the U.S. with some awesome new covers that both my girls and I adore. They are really attention grabbing and the content inside is just as exciting.

I have enjoyed reading them myself, you can see our first review HERE of Rose, and as well this second book, Rose and the Lost Princess.  It’s a winner any mom, grandma, aunt, or friend can great about picking up for a special girl. Even if Easter giving has passed, summer break is soon upon us and this would be a great book for reading over break. My girls read it the first couple days of this spring break while I was finalizing some work. They breezed through it (yes, my 6 year old is a 560 Lexile Level) and enjoyed the fast paced mystery.

Before we head into their reviews, here is an interview that Emma did with Holly Webb during the tour for the first book, Rose. You can see that HERE. She asks some really great questions and you can learn a lot about Holly and her series by reading that!

I really like this series, even if I read on  a little higher level now. I like books with magic, mystery, and adventure a lot and though it is sometimes hard for a book to keep my attention, this one did. I really recommend it for girls who are reading middle readers. Maybe before they read Harry Potter, they could try these out first. I always look forward to the next one in this series. It has some funny parts too and she describes things really well. She is a great writer for girls my age and understands how my friends and I might act in the same situations. Can’t wait for the next book by Holly!

This is a great book. It took me longer than my sister, but I still didn’t want to stop reading it. I love the magic and the fun of the book. I like her details. I feel like I am in the story. I love the way the book looks and I like the story. I like her cat and that she likes chocolate. It was

Great buy for a middle0-reader aged 7-9!! Don’t miss this series!! Mom and two daughters all agree!!

Rose and the Lost Princess, Synopsis~

Not all magic is used for good…

Rose’s whole life has changed in a matter of weeks. She’s gone from being a lonely orphan to a magician’s apprentice, though she’s learned that power comes at a price. Rose’s magical abilities blossom, but she’s still uneasy about her new powers. Even Rose’s friends don’t seem to trust her anymore, especially when rumor of dark magic begin to swirl through the city.

Then the country’s beloved princess vanishes, and Rose learns she must find the missing girl. Can Rose shatter the power of an evil magician before all is lost?

“Magic, mystery, adventure, and friendship—this book has it all.”—Books for Kids

“One of those pure unqualified delights tht I dearly hope folks will read.”—A Fuse 8 Production

Buy it on Amazon HERE.

Holly Webb is a bestselling author in the UK with her books Lost in the Snow and Lost in the Storm. As a child growing up in London, Holly fell in love with stories from Ancient Greek myths, which led to studying Latin and Greek and eventually reading Classics at University.

She worked for five years as a children’s fiction editor, before deciding to become a writer. The Rose books stem from a childhood love of historical novels, and the wish that animals really could talk.

She lives in Reading with her husband and three small children.

I was given a complimentary copy of this book in exchange for an honest review.

Article on Shaping a Series, by YA author Anna Staniszewski of My Very UnFairytale Life Series

by Anna Staniszewski,
Author of My Very UnFairy Tale Life and its sequels, My Epic Fairy Tale Fail and My Sort of Fairy Tale Ending

When I sold my first book, My Very UnFairy Tale Life, it was a standalone novel with series potential. That meant there were tentative plans to make it a series, but I had to make sure the first book could stand on its own. I thought a lot about the overall shape of the first book and how to wrap things up in a satisfying way, though I did leave one thread open, just in case.

Luckily, my publisher bought two follow-up books—hooray! I started planning and writing and scratching my head. I wanted to make sure that each of the three books had that same satisfying beginning, middle, and end as the first book, but I also wanted the three books to have a strong overall shape.

I spent a lot of time making sure to resolve each smaller conflict in the books while making the larger question (will Jenny ever find her parents?) bigger and more important in each book. That way, I tried to create two ongoing story arcs throughout the series:

The biggest thing I discovered about this technique was how much everything needed to feel connected: a seemingly goofy side plot became important later on, etc. I realized that every character and plot twist had potential to have deeper meaning as the books continued. Because of all the cumulative experiences throughout the trilogy, my main character could hopefully change and grow and triumph by the end. 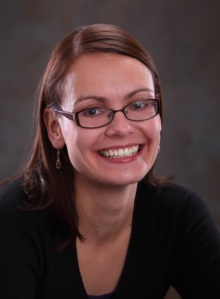 Born in Poland and raised in the United States, Anna Staniszewski grew up loving stories in both Polish and English. She was named the 2006-2007 Writer-in-Residence at the Boston Public Library and a winner of the 2009 PEN New England Susan P. Bloom Discovery Award.

When she’s not writing, Anna spends her time teaching, reading, and challenging unicorns to games of hopscotch.

She is the author of My Very UnFairy Tale Life and its sequels, My Epic Fairy Tale Fail and My Sort of Fairy Tale Ending, all published by Sourcebooks Jabberwocky.

Look for the first book in Anna’s next tween series, The Dirt Diary, in January 2014, and visit her at www.annastan.com. 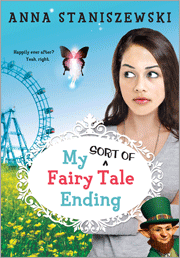 In My Epic Fairy Tale Fail (November 2013) – Book 3 in the Series, Jenny is back with an all new adventure, and this time, her happily ever after seems light-years away. While Jenny’s search for her parents leads her to a rundown amusement park called Fairyland, she encounters creepily happy fairies and disgruntled leprechauns; Jenny is sure they are keeping her parents from her. With the help of some new-found friends, Jenny finds a way to rescue her parents and defy the crazy Queen Fairy, but at the expense of putting all magical worlds in danger.

Anna Staniszewski creates a magical world that’s totally relatable. You’ll find yourself wishing you were alongside Jenny fighting against unicorns (who aren’t as peaceful as you think) and traveling to fantastical realms.
—Girls’ Life Magazine

A speedy and amusing ride that displays a confident, on-the-mark brand of humor, mostly through Jenny’s wisecracking narration. [The] inventive and lighthearted premise will keep readers entertained.
—Publishers’ Weekly

“Returning with her deliciously droll wit and a brand new mission for her now-thirteen-year-old heroine, Anna delivers another breezy magical romp . . . the joking tone and thoughtful fairy tale play make this a fresh middle-grade read.”—Horn Book

The other books in the My Very UnFairy Tale Life Series:

Go to http://www.annastan.com/books/ to read first chapter excerpts and download her e-book prequel for free!

Tagged as Anna Staniszewski, books for young girls, fun modern YA, My very unfairytale life series, new YA books, sourcebooks jabberwocky, YA books, YA for 2013