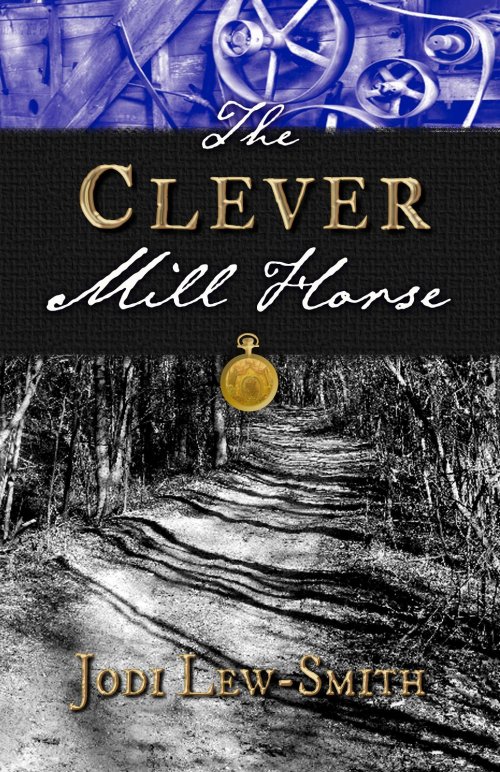 I first wanted to read The Clever Mill Horse because I love history of the 1800s and have some strange obsession with mills and grist mills (might be in my blood, my great x6 grandfather owned a mill). As well, I like weaving and textiles and all those old sorts of professions and inventions. I enjoyed Jodi’s foreword quite a bit about the flax vs. cotton mill and the history and I thought it was going to be a wonderful read about inventing the flax-mill and how it worked and changed society.

Though I don’t think that initial wish came true, there was still  much in the book to be enjoyed. I did hope that it would have an independent and incorrigible female protagonist that was determined and defied the odds. Check! It did. That was clear right from the start with Ella and carried on throughout the book, as she gave us a well-rounded, intelligent, and feisty female that the rest of us can all admire. That was her best formed character, followed by Aunt Lucille, the Native American from the Oneida tribe named Pete, and Jenny, Ella’s sister. I also enjoyed the antagonist, Emerston, as he was conniving, manipulative, and wholly dimensional. I felt those characters were the best done and those are the ones I’d remember as the stars of the book. At first I wasn’t sure that any of her characters would be memorable like Ella, and almost found them flat or surface in the beginning, but by halfway in, she proved me wrong as the other characters began to show themselves. I was glad to see so many strong female characters in this book.

I have to admit when I started the book I wondered where it was going and if it was reading like a middle reader more than a novel. It was slow to start and I wondered if I’d want to read it. However, eventually it picked up so if you read it and think this, don’t give up on it. I saw at least by chapter four that there was suspense, a mystery, clues, and much more just beyond the innovation of a flax-mill, which really took a back seat to the family and town drama as the story becomes more a journey of the soul of Ella as she discovers her worth and purpose.

Though I was unsure of the jilted English language she presented Pete to have as a Native American, I did admire her treatment of the Native Americans in the story, the historical background and tribe background, and how she presented him as loving, gentle, kind, and giving and had him incorporate into their lives. She was sympathetic to the Native American plight and their assimilation with white settlers who took their homes and land. I enjoyed the forbidden romance he was involved in and her gentle message to us that we shouldn’t discriminate, especially in love.

As an advocate for domestic violence, I hated that Ella’s mother did not leave Ella’s father, her abuser, and it was hard to read some of the sections for me, but I understood her character’s claim as in that time period life was hard for anyone, let alone a single woman. Those sections in the plot was very sad and emotional. Her characterization of the abuser and the abused was remarkable. She dealt with many other raw and human issues in her book too, but I don’t want to give all the surprises away.

Those are all underlying things though, as really Jodi spent a great deal of time on her plot and all the twists and turns she threw into the mix. The book was pretty long for its theme/genre, as though it was based on historical research and time period, she may have been trying to fit too much in all at once. It just felt a little unfocused, with too many things happening, and I bet it was due to the fact that she had so much she wanted to do she just couldn’t bear to cut any of it. As a content/copy editor, my eye naturally looks for this, and it isn’t to shame her as a writer, but to help her improve. I see places that could have been left out and the book would have propelled further forward all the same for the reader.

Also, with my editor cap on, in the prelude, an entire section toward the end of it in the e-book version was pasted twice. I don’t know if it was just pasted twice and I didn’t miss anything, or if it replaced something else? I would definitely check that out. Also, several times “than” used when meaning “then” and other small things like that which added up. Some of the vocabulary seemed forced and in other places, not strong enough.

Overall, I really liked the suspense, the journey/adventure they ended up going on during the second half of the novel, how several of the characters showed great growth and courage, the mysteries (that’s where the horse in the title comes in too), and the pioneer intrigue. There were plenty of surprises, secrets, reveals, and drama. It was clean enough (no sex, bad words, etc.) that I would be able to let my teenager read it and I like that about it too.

The novel’s plot and theme reminded me some of the writer Elizabeth Camden (that’s high praise, she is a wonderful author who writes these types of historical suspense, features strong female leads, and has hints of clean romance). Now what Jodi needs to do with her potential is to practice her craft and hone in on her sentences, her dialogue, and her focus. She is a great plot weaver and I look forward to seeing her grow her writing skills.

For her first novel, Jodi shows promise as a real storyteller that knows how to funnel the sensitivities of human emotions, the trials of life, the power of the female, and lessons learned messages. She was able to mix that with a plot full of suspense, drama, and mystery, in order to create an entertaining historical read that showed how one young girl could overcome any odds. I look forward to reading the next novel in the series!

Watch for my upcoming interview with Jodi!

*I was given a copy of this book in exchange for an honest review. My opinions are my own. My content and editing critiques are for the author and will not be what is pasted to Amazon or GoodReads.*

1810, upstate New York. 21-year-old Ella Kenyon is happiest gliding through the thick woods around her small frontier town, knife in hand, her sharp eyes tracking game. A gift for engineering is in her blood, but she would gladly trade it for more time in the forest. If only her grandfather’s dying wish hadn’t trapped her into a fight she never wanted.

Six years ago, Ella’s grandfather made her vow to finish his life’s work: a flax-milling machine that has the potential to rescue her mother, brother, and sister from the brutality of life with her drunkard father. The copious linen it yields could save her struggling town, subjugate the growing grip of southern cotton. Or it could be Ella’s downfall. If she’s not quick enough, not clever enough to succeed, more than her own life rests in the balance…

Praise for The Clever Mill Horse

“Jodi Lew-Smith’s The Clever Mill Horse is that rarest of all contemporary novels: an authentically old-fashioned adventure story, in all the best senses. Full of drama, humor, plot surprises, and, best of all, memorable characters, The Clever Mill Horse had me hooked from page one. Best of all, there’s a sequel coming. I can’t wait.” – Howard Frank Mosher, author of Where the Rivers Flow North

“In this delightful debut novel set in the early 19th century, a young woman fights to patent her flax-milling machine. . .An assured, cleverly plotted piece of historical fiction with an irrepressible female protagonist.” – Kirkus Reviews 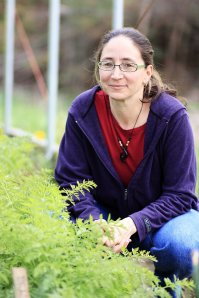 Jodi Lew-Smith lives on a farm in northern Vermont with her patient husband, three wonderfully impatient children, a bevy of pets and farm animals, and 250 exceedingly patient apple trees which, if they could talk, would suggest that she stop writing and start pruning. Luckily they’re pretty quiet.

With a doctorate in plant genetics, she also lives a double life as a vegetable breeder at High Mowing Seeds. She is grateful for the chance to do so many things in one lifetime, and only wishes she could do them all better. Maybe in the next life she’ll be able to make up her mind.

For more about Jodi and about the lives and world of the characters in the novel, visit her website or blog. You can also connect with her on Facebook and Goodreads.