It’s Krampusnacht! Find Out Who Author Matt Manochio Would Cast in His Movie

It’s Dec. 5 and Krampusnacht, the night that Krampus, with his horned-head, lolling tongue, and bushy fur comes out with bag or wash bucket on his back to cart of naughty children, pass out coal, and beat those who’ve been spicy with a switch!  So, you better hope you’ve been good, because tomorrow is Saint Nicholas Day and you’ll want to be able to enjoy smiles and gifts and give that rosy cheeked icon a hug. I doubt Krampus gives hugs.

I just love any good folklore and have always been a fan of Christmas Around the World mythology. Anyway, for almost a few months now I’ve been working at the publicist for Matt Manochio, the author of The Dark Servant that released on Nov. 4, giving readers just enough time to plan to be good before today hit. I know I didn’t want my hiney beat with a bundle of twigs! It’s been a BLAST! You can see all the tour stops we’ve had and places we’ve spread the word about Krampus (who, what, where, when), HERE.

If you haven’t picked up your copy of The Dark Servant, don’t miss out on the fun. But also, Matt has a wonderful message in the book about teenage bullying, stemming from school shootings and such. It’s a book that hits the Young Adult market as well, and the prose is clean enough for that sort of purchase. He has solid characters and really brings a true legend to life. It’s an amazing debut for an author we’ll see a lot more of in the future.

AND DON’T MISS THE GIVEAWAY CONTEST BELOW TO WIN A KRAMPUS HOODIE AND SIGNED COPY OF THE BOOK! READ ALL THE WAY DOWN TO LEARN HOW TO MAKE A COOL PINTEREST BOARD AND WIN THE CONTEST.

Now, in honor of Krampusnacht, Matt has written a special post just for my blog. Since he’s running on fumes to create awareness of Krampus (and The Dark Servant), I think Santa will bring him special gifts in his stocking this year, don’t you?

Take it away, Matt!

Who Would I Cast in My Krampus Movie?
by Matt Manochio, Author

It is Krampusnacht today—just like it is in my book, The Dark Servant.

When writing any type of novel, the author typically envisions which actors would be best for the movie. Because we all want to sell the movie rights. One independent Krampus film has already been released. Kevin Smith, of Clerks fame, and a Jersey guy like me, will release a movie with four Krampus vignettes next Christmas. And I believe there’s one other film in the works.

Steven Spielberg, George Lucas, JJ Abrams and Ridley Scott, listen up! I’m willing to cut a deal, on the condition that I get a say in the casting. (I know I’m in absolutely no position to make these demands, but stay with me.)

Actor: Peta from The Hunger Games movies. Most teenage girls will know the actor’s name, which I’m too lazy to look up. But this guy fits the generic mold and could pass for a teenager even though he’s probably 30 by now.

Character: Maria Flynn: a 17-year-old high school junior with red hair and who Billy desires more than Gargameldesires Smurfs. (It’s early, my coffee hasn’t kicked in. I’ll try to come up with something better later.)

Actress: Molly Quinn. That’s right! Castle’s daughter. Yes, I know her name but not Peta’s. Get over it. And to my wife, I love you. And Quinn could actually pass for Maria because she’s 21. Sissy Spacek was 27 when Carrie hit screens in 1976. Honestly, casting people?This is a no-brainer.

Actor: John Schneider: Yes, Bo Duke from the Dukes of Hazzard. I figure SyFy could get in on the action and make an obscene preemptive bid for the film rights, and if they do, John Schneider has SyFy movie sheriff written all over him because I’m pretty sure he’s played one in the past. If John’s busy (which I doubt would be the case), the backup choice is Sir Kenneth Branagh. He’ll probably have to hit the weight room, but if he can play Gilderoy Lockhart, he can pull off Don Schweitzer even though the characters are in no way comparable.

Actor: Thor. You know, the Australian guy who was just named People’s Sexiest Famous Actor Alive. You ever notice that people who aren’t famous actors never get Sexiest Man Alive consideration? I mean, nobody’s called me. That’s why I changed the category name (because it’s accurate). But I figure putting a big hunk of man candy in the movie will draw the ladies.

Actor: Sean Penn from 30 years ago, right around the time he played Jeff Spicoli from Fast Times at Ridgemont High. Unfortunately the government hasn’t gotten around to making those solar-powered time machines that get crappy mileage, so we’ll have to go with someone more current. So, let’s see, how about Corey Feldman from 20 years ago. Oh, that’s right. The time machine. Damn! Oh, just cast a damn Jonas Brother. You pick.

Actor: Meth Damon. That’s right, that asshole from Breaking Bad who got what he deserved from Jesse after Mr. White popped the trunk and mowed down the skinheads.

Character: Jason Nicholson: a high school bully who’s Billy’s age and who absolutely deserves to get the shit beat out of him.

Actor: Justin Bieber. Because we all want to see this guy get the shit beat out of him. Even the Canadians.

Character: Krampus! A 10-foot-tall furry devil with otherworldly strength and sly personality, and who wields a long chain and a club made of birch branches.

Actor: Daniel Day-Lewis wearing a fur suit and a boatload of prosthetic makeup. Under no circumstance do I want my Krampus to be CGI. Give me a guy in a rubber monster mask over Gollum any day of the week. And I don’t want just anybody running around in that suit, I want someone who’ll get into the role and stay there, like your loser stoner brother in the basement. I like the idea of Daniel Day-Lewis thinking he’s Krampus all day on the set, even during lunch break, screaming at the cameramen and beating the gaffers. 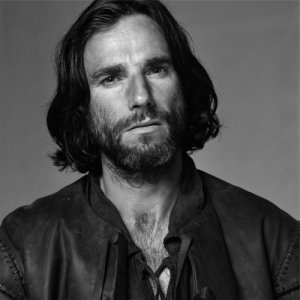 This is just a partial list, there are so many more characters to cast, but these are some of the big roles. And yes, I plan on being a background character somewhere in there. (Again, this is my fantasy. Play along.)

So, Stephen, George, JJ, Ridley, you know where to find me. And if you don’t, it’s not hard. Ask your assistants.

December 5 is Krampus Nacht — Night of the Krampus, a horned, cloven-hoofed monster who in pre-Christian European cultures serves as the dark companion to Saint Nicholas, America’s Santa Claus. Saint Nicholas rewards good children and leaves bad ones to Krampus, who kidnaps and tortures kids unless they repent. 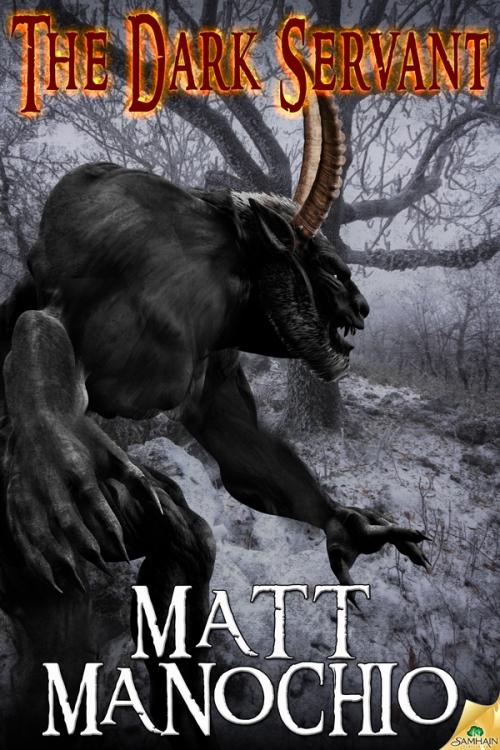 Santa’s not the only one coming to town …

It’s older than Christ and has tormented European children for centuries. Now America faces its wrath. Unsuspecting kids vanish as a blizzard crushes New Jersey. All that remains are signs of destruction—and bloody hoof prints stomped in snow. Seventeen-year-old Billy Schweitzer awakes December 5 feeling depressed. Already feuding with his police chief father and golden boy older brother, Billy’s devastated when his dream girl rejects him. When an unrelenting creature infiltrates his town, imperiling his family and friends, Billy must overcome his own demons to understand why his supposedly innocent high school peers have been snatched, and how to rescue them from a famous saint’s ruthless companion—that cannot be stopped.

“Beautifully crafted and expertly plotted, Matt Manochio’s The Dark Servant has taken an esoteric fairy tale from before Christ and sets it in the modern world of media-saturated teenagers—creating a clockwork mechanism of terror that blends Freddy Krueger with the Brothers Grimm! Highly recommended!”
— Jay Bonansinga, New York Times bestselling author of The Walking Dead: The Fall of the Governor

“Matt Manochio is a writer who’ll be thrilling us for many books to come.”
— Jim DeFelice, New York Times bestselling co-author of American Sniper

“Matt Manochio has taken a very rare fairytale and turned it into a real page-turner. Matt has constructed a very real and believable force in Krampus and has given it a real journalistic twist, and he has gained a fan in me!”
— David L. Golemon, New York Times bestselling author of the Event Group Series

“I scarcely know where to begin. Is this a twisted parental fantasy of reforming recalcitrant children? Is it Fast Times at Ridgemont High meets Nightmare on Elm Street? Is it a complex revision of the Medieval morality play? In The Dark Servant, Matt Manochio has taken the tantalizing roots of Middle Europe’s folklore and crafted a completely genuine modern American horror story. This is a winter’s tale, yes, but it is also a genuinely new one for our modern times. I fell for this story right away. Matt Manochio is a natural born storyteller.”
— Joe McKinney, Bram Stoker Award-winning author of The Savage Dead and Dog Days

“Just in time for the season of Good Will Toward Men, Matt Manochio’s debut delivers a fresh dose of Holiday Horror, breathing literary life into an overlooked figure of legend ready to step out of Santa’s shadow. Prepared to be thrilled in a new, old-fashioned way.”
— Hank Schwaeble, Bram Stoker Award-winning author of Damnable, Diabolical and The Angel of the Abyss

“In The Dark Servant, Manochio spins a riveting tale of a community under siege by a grotesque, chain-clanking monster with cloven-hooves, a dry sense of wit, and a sadistic predilection for torture. As Christmas nears and a snowstorm paralyzes the town, the terrifying Krampus doesn’t just leave switches for the local bullies, bitches, and badasses, he beats the living (editor’s note: rhymes with skit) out of them! Manochio balances a very dark theme with crackling dialogue, fast-paced action, and an engaging, small-town setting.”
— Lucy Taylor, Bram Stoker Award-winning author of The Safety of Unknown Cities

“A fast-paced thrill-ride into an obscure but frightful Christmas legend. Could there be a dark side to Santa? And if so, what would he do to those kids who were naughty? Matt Manochio provides the nail-biting answer with The Dark Servant.”
— John Everson, Bram Stoker Award-winning author of Violet Eyes

“A high-octane blast of horror. A surefire hit for fans of monsters and gore.”
— Mario Acevedo, author of Werewolf Smackdown

For everyone! CREATE a PINTEREST board by choosing one of the following themes: Krampus, Old World Legends, Vintage Holiday, Old World Christmas, Christmas Around the World, Traditions and Legends,  Myths, Monsters, and Horror, or something very similar.

Your board will be judged on the above PLUS your creativity and effort in the project! Send Erin at hookofabook@hotmail.com your Pinterest page to enter by Dec. 8. Of course you can continue to use it through the Holiday if you wish!

Prize: A “Santa Checked His List and I’m on the Naughty Side” package. This will include your choice of Krampus themed apparel (t-shirt or sweatshirt, men or women, visuals to come) and a signed paperback of the book.

There might be shipping limitations. Check back to tour page before entering if you live outside the U.S. for updated information.

And a board about Matt:

Anyone on the tour, or outside the tour, who reviews The Dark Servant on Amazon and GoodReads and sends their review link into Erin (Publicist for Matt Manochio) at hookofabook@hotmail.com, now through Dec. 31, 2014, will be entered to win a $25 Amazon gift card.